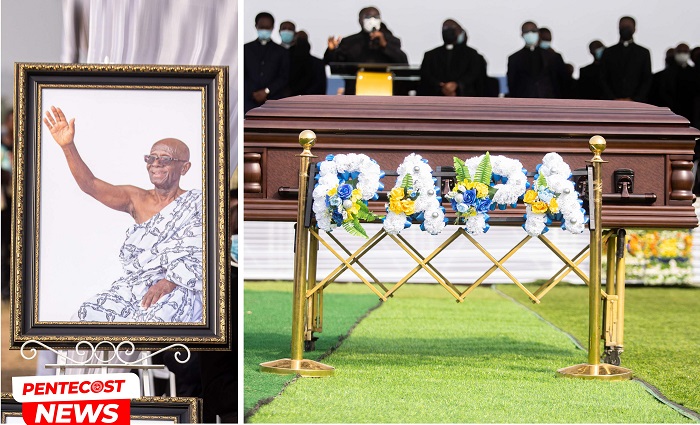 Teeming mourners involving relatives, prominent members of society, as well as ministers and members of The Church of Pentecost, paid their last respects to the former Finance Board Chairman of the Church, Elder Emmanuel Owusu Kissi (Retired), in a glorious funeral service held in his honour at Suhum on Saturday, February 5, 2022.

Unlike the typical funeral service, which is characterised by an overwhelming display of emotions and grief, this event was instead a celebration of the life of a faithful soldier of the Cross whose life could easily pass for a template (role model) for all Christians, particularly officers and members of the Church.

It was, therefore, fitting that after listening to the glowing tributes paid to Elder Kissi’s extraordinary life, Apostle Emmanuel Gyesi-Addo (the immediate past International Missions Director and the conductor for the event), spontaneously led congregants to give a rousing round of applause to the late elder for a life well-lived.

Delivering a sermon based on Hebrews 11:32-40, Apostle James Smith Gyimah (Rtd.) further eulogised Elder Kissi by saying that he lived a life of faith.

According to him, although the former Finance Board Chairman endured a difficult life – losing both parents and other guardians at a very tender age – he held on to his faith in Christ to the very end of his life on earth.

The former Suhum Area Head said that, just like the “Heroes of Faith” in Hebrews 11, Elder Kissi was able to hold on to his faith because he looked forward to the hope of the resurrection.

He said that the outcome of his life is a testament that “Faith is not a bridge of troubled waters, but a pathway through them.”

Apostle Gyimah, therefore, urged Christians to be resolute in their faith and continue to hold fast to the hope of the resurrection.

In a brief remark, Apostle Nyamekye advised elders of the Church to emulate the extraordinary life of Elder Kissi by rendering faithful services to the Lord and living Christ-centered lifestyles.

Elder Kissi accepted Christ as his Lord and personal Saviour in the then Apostolic Church at Suhum in 1951 and was baptised by the late Pastor K. Boateng. He served the Lord zealously with his strength and resources.

During the challenging times in the Apostolic Church, young Elder Kissi stood firmly behind the McKeown group, which later became The Church of Pentecost after the separation. He was also very instrumental in galvanising the Church from total collapse after the hard-hitting impasse between the Apostolic Church and The Church of Pentecost, which resulted in the latter losing most of its properties to the former.

The Church recognising Elder Kissi’s love and zeal for the Lord gave him various appointments and roles to play. Some of these were Witness Movement (now Evangelism Ministry) Leader at the local, district and regional levels, treasurer for the Witness Movement, Presiding Elder for the then Suhum Assembly, Area Deacon for the then Eastern Region “A” and the first Area Deacon for Suhum Area. He later served as the Finance Board Chairman of the Church from 1985 to 1998.

As Finance Board Chairman, Elder Kissi saw to it that the needs of ministers were well taken care of while ensuring that the resources of the Church were well accounted for. Under his able leadership, many key financial policies were introduced in the Church to help cushion the lives of ministers, especially those in the northern part of the country. He discharged his duty so well that it was hard to believe that he had no accounting background. Throughout his 13-year period of service, he proved utmost integrity and ensured prudent use of the church’s resources. He was known for his integrity, devoutness, and immense generosity.

Elder Kissi was called to glory on Thursday, November 18, 2021, at aged 91. He is survived by seven children, three of whom are in the full-time ministry of The Church of Pentecost namely, Pastor Samuel Agyekum Kissi (New Achimota District), Mrs. Rose Dansoa Kumi-Larbi (Wife of the General Secretary), and Mrs. Joyce Adupong (Archway District, UK).

May he rest in perfect peace.