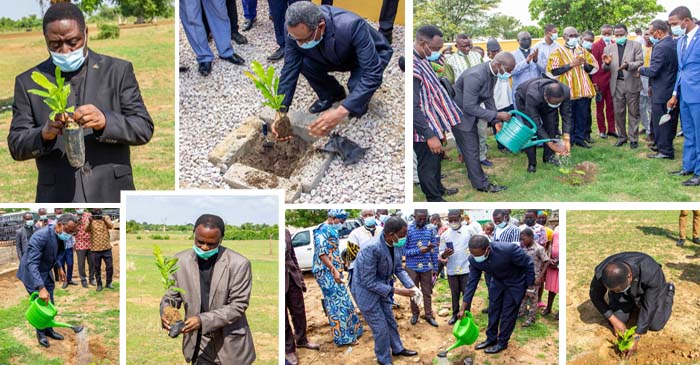 Ministers of The Church of Pentecost have been encouraged to make it a habit of planting and nurturing trees as part of their day-to-day activities.

This appeal was made by the General Secretary, Apostle Alexander Kumi-Larbi, when he planted a tree at the premises of the Bolgatanga Central Assembly on Friday, June 25, 2021, as part of a three-day duty visit to the Upper East Region.

During his visit, the General Secretary saw to the planting of nine trees, three of which he planted himself.

In addition to the tree he planted at Bolga, Apostle Kumi-Larbi planted two others at the premises of the Pentecost Clinic at Kultamise and on the 10-acre farmland acquired by the church for irrigation farming at Ankpaliga, near Zebila.

He encouraged the ministers to make it a habit of planting more trees and nurture them.

“I have already planted seven trees. Now every opportunity I get, I plant a tree. At any function I attend, I make it a point to plant a tree. It is possible. So, I encourage every minister, especially those on the field, to do well to plant and nurture more trees,” he said.

The General Secretary’s call is in support of the church’s environmental care campaign for this year which focuses on tree planting. In line with this year’s campaign, the church has initiated an audacious vision to plant one million trees nationwide and nurture them. The exercise coincided with the tree-planting drive of the government, which also sought to plant and nurture five million trees across the nation.

According to a report released by the World Resources Institute (WRI) in 2019, Ghana is losing its rainforest faster than any country in the world. This alarming situation is largely caused by human activities.

To forestall this problem, the church has embarked on a tree-planting drive to plant and nurture 1 million trees across the nation. The objective of this exercise is to motivate people to plant trees and increase awareness about the importance of trees.

It is also to create a sense of responsibility among people to nurture trees and to motivate communities and churches to actively participate in the protection and preservation of the environment.