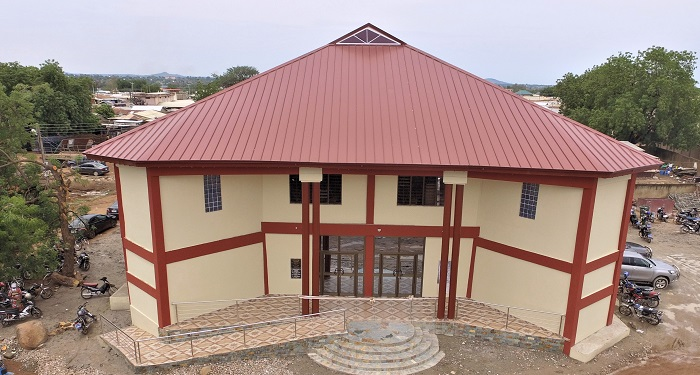 The church building of the Bolga Central Assembly in the Bolga District of The Church of Pentecost was dedicated on Friday, June 25, 2021, by the General Secretary, Apostle Alexander Nana Yaw Kumi-Larbi.

The building, which was constructed at a total cost of GH¢1,390,608.64, was funded through grants from the General Headquarters, Missions Office, Bolga Area and the Bolga District as well as funds from the Central Assembly. Some benevolent individuals of the church also made significant contributions to the project.

Speaking on the topic: “Take Courage, Don’t Be Afraid” based on the disciples’ encounter with Jesus in Matthew 14:22-32 with emphasis on verse 27, Apostle Sylvester Arhin said that sometimes God allows Christians to go through trials, immense suffering, perennial disease, persecution, and even mental illness.

He said that during such unbearable situations, some are even compelled to ask whether God truly exists. “During such times, you do not hear the voice of the Lord, not in dreams nor visions; He just seems very quiet,” he said.

He noted that the disciples found themselves in a similar situation when strong winds hard turned against the boat they were navigating on the sea. However, in their hopeless situation, Jesus stepped in and proved Himself mighty.

“The disciples feared that they would drown because they were losing the fight against the tide. Yet the very water that they were afraid of drowning in, Jesus walked on it! Not only did He walk on the water, but He also walked steadily as though there were no strong winds. This was an indication that whatever the situation is, Jesus has it under His feet,” he said.

He further noted that the story also indicates that God glorifies Himself in the dire situation of the Christian, saying: “God is going to show forth His glory through the very trials, persecutions, suffering or illnesses we are going through.”

Apostle Arhin, therefore, encouraged Christians to be resolute regardless of the situation they may be going through, and trust God can deliver them from it.

The Bolga Central Assembly church building project began in 2015 after a sod-cutting was performed by the then Bolga Area Head, Apostle Dr. Amos Jimmy Markin (now Evangelism Ministry Director). Later in 2018, the foundation stone for the project was laid by Apostle Kumi-Larbi. The project has since progressed under the supervision of the current Area Head, Apostle Nkrumah-Agyemang, and the current District Minister, Pastor Alex Ansong, until its successful completion in 2021. Present at the event were ministers of the church in the Bolga Area and the northern part of the country.