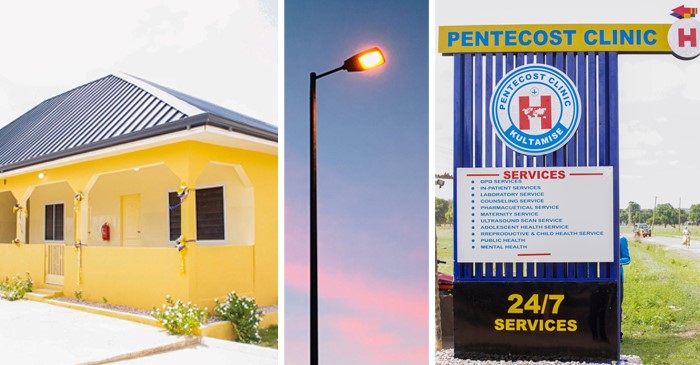 One of the communities in the northern part of the country that is yet to be connected to the national grid is Kultamise, a farming community in the Pusiga district in the Upper East Region. Time and time again, efforts made by the residents to connect to the national grid have proved futile.

Inhabitants of the community depend on neighbouring communities for electricity access to recharge mobile phones, and or engage in recreational activities such as watching football matches, etc. at a fee.

About 21 months ago, The Church of Pentecost, through its social services arm, Pentecost Social Services (PENTSOS), in consultation with the Pusiga District Health Office and the District Chief Executive (DCE) of Pusiga, cut sod for the commencement of a clinic facility to help meet the healthcare challenges of the Kultamise community.

In times past, residents of Kultamise and its surrounding towns have gone through dire ordeals in accessing quality healthcare. The situation has contributed to worsening the plight of pregnant women, especially when in labour as their spouses had to carry them on their back or motorbikes to cross a river to access healthcare in Pusiga.

The construction of the clinic was, therefore, an intervention by the church to provide a health facility that can serve the community and its environs, particularly in helping to reduce maternal and child mortality in the Pusiga District.

The project, which was constructed under the supervision of the Estate Department at the church’s Headquarters, and the Bawku Area Estate Committee, was successfully executed and commissioned on Thursday, June 24, 2021.

The ultramodern edifice, estimated at GH¢ 850,000.00, has a fully furnished Out-Patient Department (OPD), Male and Female Wards, Delivery Ward, Dispensary, Washrooms for both patients and staff, Laboratory, and Consulting rooms as well as residential accommodation for health officers.

Strongly moved by the church’s gesture, Hon. Alhassan Zubeiru, the DCE of Pusiga, pledged to ensure that the community is connected to the national grid before the commissioning of the clinic. This was partly because of the ultramodern medical equipment fitted into the clinic facility, most of which would require electricity to operate to serve the health needs of the people better.

With this renewed optimism, the DCE charged the ECG Office in the Pusiga district to do whatever it took to provide electricity access to the community before the commissioning.

The ECG team responded positively to the DCE’s directive and commenced work. All things seemed to be going according to plan but a day to commissioning it the work suffered a major setback late in the night. The transformer that was to distribute power to the community was unable to support the electricity load being generated. After several consultations, the only alternative was to get a new outlet to supply the community with electricity. However, this new process would mean installing a new transformer to create a new access point.

United towards this common objective, the youth of the community willingly offered to assist the officials to dig holes for the installation of the transformers. Working throughout the night into the D-day, the team, with the support of the residents, succeeded in providing electricity for the community after a very “long” wait.

Indeed, life in Kultamise will never be the same again and Thursday, June 24, 2021, will remain one of the most memorable days in the history of the community. For on this day, the people received a double blessing – an ultramodern health facility and access to electricity. The spiritual implication of this is that the people of Kultamise have received a divine visitation. The presence of the church in this Muslim-dominated community is also an indication that a seed of the gospel of Jesus, the light of the world, has successfully been sown and would soon flourish and lead many into His saving knowledge. For we are very convinced that it is no coincidence that on the very day that The Church of Pentecost came to town, light shone around. To God be the Glory!