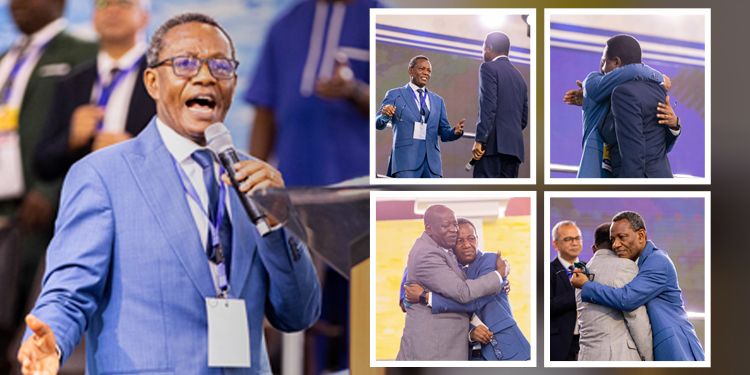 The Chairman of The Church of Pentecost, Apostle Eric Nyamekye, got very emotional this morning as he announced the impending exit of the indefatigable General Secretary of the Church, Apostle Alexander Nana Yaw Kumi-Larbi, at the opening session of the ongoing November Heads’ Meeting at the Pentecost Convention Centre (PCC), Gomoa Fetteh.

Apostle Nyamekye threw the entire participants into a state of weeping when he sobbed and virtually became speechless when announcing the exit of the chief scribe of the church.

He stated this when he finally put himself together: “This Heads’ Meeting happens to be the last that Apostle Alexander Nana Yaw Kumi-Larbi will be attending in his official capacity as the General Secretary of The Church of Pentecost.”

He continued: “You will all bear with me that he has served this Church selflessly and meritoriously in the last nine years. I humbly crave your indulgence to give him a stand ovation to appreciate our brother.

He added: “May the Lord, the One whom you have so faithfully served, bless you. And may He grant you the grace to end your tenure gloriously. And may the years ahead of you be more fruitful.”

Apostle Alexander Nana Yaw Kumi-Larbi, an engineer by training, was appointed General Secretary of the Church in 2013 during the time of Apostle Prof. Opoku Onyinah. His second term of office ends in 2023.

Tags: Apostle Kumi-Larbi General Secretary of The Church of Pentecost