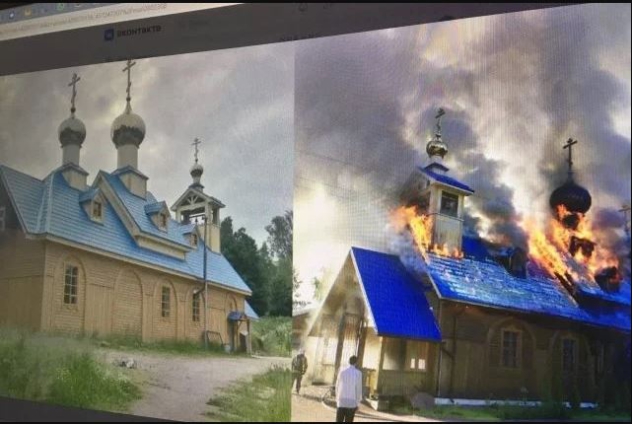 Tired of seeing his family’s money being donated to the local church, an exasperated Russian man set the place of worship a blaze in a feat of rage.

On the morning of June 26, a fire broke out at the Church of St. Basil the Great in the village of Pargolovo, Russia’s Saint Petersburg district.

The fire quickly engulfed the wooden roof and walls of the building, and the entire place would have probably burned to a crisp until the firefighters arrived, if the parishioners didn’t put the fire out themselves.

Still, the damage was considerable, and local news outlets reported that many of the locals had tears in their eyes as they looked at their local place of worship. But that sadness quickly turned to anger directed at the man responsible for the devastation.

In the beginning, many believed that the fire had been the result of a short circuit due to faulty electrical wiring, and some even believed it a divine sign to build a larger, more beautiful church.

But it didn’t take long for police to find the true culprit, a 36-year-old local man who had allegedly decided to take revenge on the church after quarreling with his wife.

The father-of-four reportedly fought with his wife, who often volunteered at the church, because she kept donating all their money to it. So on Sunday morning, he put a canister of gasoline in the trunk of his car, drove down to the church, splashed the walls with fuel, and after making sure no one was inside, set it ablaze.

“He worked 24/7, they have four children and his wife works at the church. Everything he earned, she brought to the temple,” the Komsomolskaya Pravda newspaper reported. “Because of this, they had a conflict. He realized that he would either do something to his wife or burn the temple.”

The man chose the latter, and never denied his guilt in front of the police. He even asked to be detained for his crime, but the judge decided to have him go home until sentencing is passed in his case.

It could be because of a lack of a criminal record or because of his four children, but at least for now, the scorned arsonist is a free man.

Luckily, although the fire caused serious damage to the outside of the Church of St. Basil the Great, the interior was largely unaffected by the blaze, according to the priests serving there.