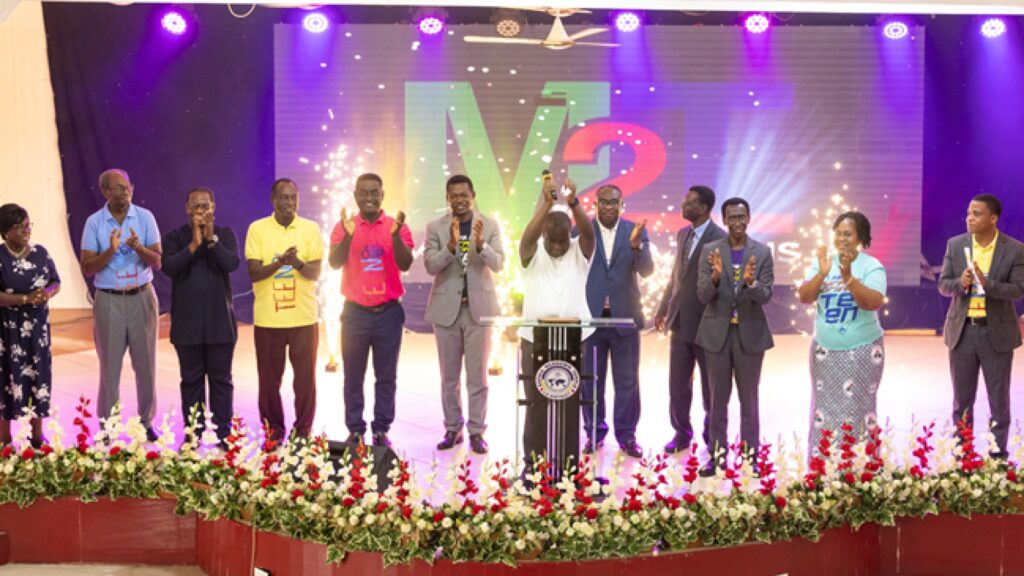 In the advent of repackaging the activities of teenagers in The Church of Pentecost, the Youth Ministry, on Sunday, May 28, 2022, relaunched teen ministry. This was necessitated to help transition teens from the Children’s Ministry of the Church into the mainstream church through the Youth Ministry.

The ceremony, held at the Sophia McKeown Temple (SMT), near the Church’s Head Office, at La, in Accra, was chaired by Apostle Emmanuel Agyemang-Bekoe, International Missions Director of the Church.

The Patron of the Youth Ministry of the Church, who doubles as the Koforidua Area Head of the Church, Apostle Samuel Osei Asante, thanked and commended the efforts of the various predecessors of the leadership of the Ministry, who stood in to ensure a strong foothold in the Church.

“When it comes to focusing on the ministry to the teens in the Church, we cannot forget the great work done by Apostle Peter Ayerakwa (Rtd.), during the times of Pentecost Youth and Evangelistic Movement (PENTYEM); Apostle Dr. Alfred Koduah (Rtd.), when he was a District Pastor in Tema, in his book which highlighted and drew the attention of the Church, to the importance of ministering to the teens,” he stated.

“Together with children under 13 years, the percentage of young people in the Church is 75%. Out of the Youth Ministry’s membership, teenagers make up 45% whilst 55% are young adults,” he pointed out.

Stressing on the role of the church in possessing the nations, Apostle Asante said that there was the need to equip the teens and young adults who make up a large portion of the Church.

The Koforidua Area Head of the Church, further urged the leadership of the youth ministry to revitalize and develop strategies that reaches out to the teens in the church, since major decisions in their lives are made during this period.

“I use this opening to appeal to Area Heads, District Ministers, Presiding Elders and parents, to give maximum support to the ministry to teens,” he said, stressing on the fact that the stability of the relaunch, greatly relied on them.

The Executive Council Member of the Church, used the occasion to also officially launch the Church’s Skills Training Program. This, he asserted falls in line with the five-year strategic vision of the Church, which seeks to encourage and intensify career advisory and counselling services in the youth.

On his part, the Youth Director of the Ministry, Pastor Ebenezer Hagan, revealed that the rational for the relaunch, was as a result of early teenagers encountering difficulties adjusting to the context of what is preached, during their transition from the Children’s Ministry into the adult church and into the Youth Ministry.

Pastor Hagan also, admonished that, teenagers are most vulnerable to societal pressure, including peer pressure, which they are often ill-equipped to handle; adding: “to assist the teens through this period, we should do all that is possible through the union of divine and human agencies to meet their unmet needs which includes equipping them to overcome such pressures.

Notably, Apostle Emmanuel Agyemang Bekoe, International Missions Director of the Church, re-launching the ministry to teens, stated that irrespective of the age of Samuel, he was employed in the temple of the Lord; working with a piety of mind. Therefore, it is imperative for teens in the Church, to be fully employed in the services of the Lord, regardless of their age.

“Young people who serve God, as well as they can, the Lord will enable them to improve that they may serve Him better,” he reemphasized, and led the participants in an intensive time of prayers.