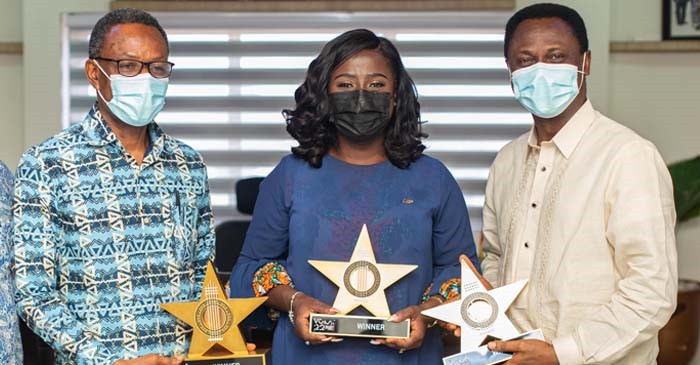 Newly-crowned Vodafone Ghana Music Award (VGMA) Artiste of the Year, Diana Hamilton, has expressed her gratitude to the leadership of The Church of Pentecost for the overwhelming support she received from the church that helped her to annex the ultimate prize.

“The adage goes that he who undertakes a good cause, deserves a push, but The Church of Pentecost has been pushing me from day one until now. The first evidence of support I saw was an announcement on the Chairman’s Special Sunday Service encouraging people to vote for me. That gesture did it for me…then the pastors followed, then members, and other people, all urging people to support me to win! For this I am very grateful,” she said.

The multiple-award-winning Gospel artiste said this on Tuesday, June 29, 2021, when she called on the Chairman of The Church of Pentecost, Apostle Eric Nyamekye, in his office at the church’s General Headquarters at La in Accra. Also present to receive her was the General Secretary of the church, Apostle Alexander Nana Yaw Kumi Larbi.

According to the songstress, the visit was to thank the church for the massive support they gave her and also solicit their prayers for the journey ahead.

Highlighting the instrumental role the church has played in her career development, Diana Hamilton, a member of the church and daughter of Apostle Felix Elvis Antwi (of blessed memory) said: “The Church of Pentecost is the church I was born into, and it is the church that gave me a platform [to nurture my talent]. From my time at the Dr. Thomas WyattTemple in Accra Newtown, where I first held a microphone to sing, the church has always opened its doors to me.

“Sometimes I jokingly say that the church paid my school fees, because it employed my dad, and has been taking care of me till now. And it has never stopped.”

She noted that the church has also helped to keep her levelheaded despite her rise in the music industry, saying, “In The Church of Pentecost, I am not seen as ‘Diana Hamilton,’ I am just Diana, and this keeps me grounded, so I am grateful!

The Chairman, on his part, was very grateful to God for the great success Diana Hamilton chalked at the event.

“The first time I heard you sing was in 1987 during a PENSA Conference. You were very little, but I could tell that your dad (late Apostle F. E. Antwi) had much confidence in your talent. To my surprise, you did so well. Since then, I have always followed your progress, so I am not surprised that you have gotten this far.

“Indeed, we were all confident that it would be a good day, but we never anticipated that it would get this big, so we give God all the glory,” he stated.

Apostle Nyamekye said that music is a powerful tool that can captivate the soul of an individual. He, therefore, urged her to strive to transform lives through her music.

“A musician is like a preacher, who ministers to people through music. As part of the “possessing the nations” agenda, we want to influence every sphere of society, including the music and entertainment space, with Kingdom principles and values.

He commended her loyalty and commitment to the church and assured her of the church’s continuing support. He also advised her not to allow her success to get into her head but to remain focused and keep a level head.

“To win four awards in one night is a great feat. But it is also possible to win six or even ten in a night, so you must keep working hard. Don’t change, keep relying on the Lord, for Christ is still your strength,” he advised. The ‘Adom’ hitmaker was adjudged the overall best artiste at this year’s VGMA held on Saturday, June 26, making her the second gospel musicians to receive the coveted prize since the inception of the award scheme. In addition, she took home three other awards, namely Gospel Song of the Year, Gospel Artiste of the Year, and the Most Popular Song of the Year.

1 day ago Samuel Ansong
We use cookies on our website to give you the most relevant experience by remembering your preferences and repeat visits. By clicking “Accept”, you consent to the use of ALL the cookies.
Cookie settingsACCEPT
Manage consent