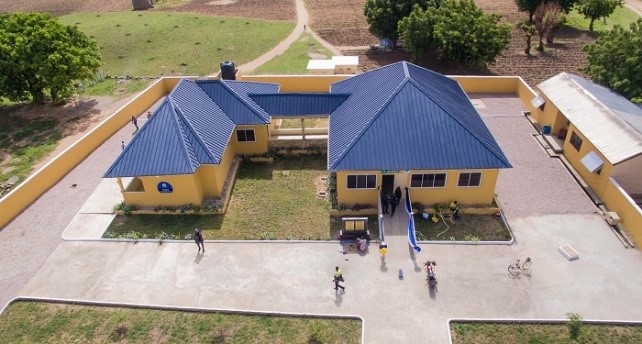 The General Secretary of The Church of Pentecost, Apostle Alexander Nana Yaw Kumi-Larbi, on Thursday, June 24, 2021, commissioned an ultramodern health facility constructed by the church at Kultamise, a farming community in the Upper East Region of Ghana.

Delivering an address on behalf of the Chairman at the commissioning ceremony, Apostle Kumi-Larbi said that in the past decades the inhabitants of Kultamise and surrounding towns have gone through great ordeal in accessing quality healthcare.

He explained that the situation has contributed to worsening the plight of pregnant women especially when in labour as their spouses had to carry them on their back or motorbikes to cross the river to access healthcare in Pusiga.

“This intervention by the church through the Pentecost Social Services (PENTSOS), was informed by the urgent need to provide a health facility that can serve the community and its environs, particularly in helping to reduce maternal and child mortality in the Pusiga district. We trust that it will provide a lasting remedy to the decades-long problem faced by the people,” he stated.

The General Secretary pointed out that the construction of the edifice is part of the strategic vision of the church dubbed “Vision 2023: Possessing the Nations.” According to him, the church, in fulfilment of Vision 2023, is partnering with the Government of Ghana to transform the fortunes of the country by contributing to its accelerated socio-economic development. Hence, the construction of major social infrastructures in various parts of the country.

Apostle Kumi-Larbi seized the opportunity to call on all and sundry to accept Christ as Lord and Saviour, declaring that it was under His influence that the church had undertaken such an audacious project.

“The truth is that the church would not have been able to undertake such a project if it were not for the love of Jesus Christ. Helping others is a virtue that we learnt from Jesus, so anyone willing to experience this love of Christ which compels us to help others, should accept Him as Lord and Saviour and He would teach you to do even greater works than we have done,” he noted.

The edifice, worth GH¢850,000.00 and fully funded by the church, has residential accommodation for the health officers, fully furnished Out-Patient Department (OPD), Male and Female Wards, Delivery Ward, Dispensary, Kitchen, Washrooms for both patients and staff, Laboratory, and Consulting rooms. Out of the total amount spent on the project, GH¢ 550,000.00 was spent on civil works, whilst the rest was spent on the medical equipment, furniture, beddings, drugs, and other related medical consumables.

The District Chief Executive (DCE) of Pusiga, Hon. Alhassan Zubeiru, said that the construction of the health facility is a major milestone in the history of Pusiga District and symbolises the promotion of healthcare in the district. He commended the church for its transformation agenda, which, according to him, is not only targeted at church members but the entire society.

The Pusiga District Health Director, Mr. Timothy Mahama, expressed concern about the spate of maternal and child deaths in the district and advised pregnant women in the community to patronise the clinic regularly to enable the medical staff to continuously monitor their conditions before, during and after childbirth. This, he said, will help reduce complications and causes of maternal and neonatal mortality.

He also urged the health workers to uphold professionalism and not to hesitate to refer patients to the district clinic whenever it becomes necessary.

The Chief of Pusiga Traditional Area, Naba Tambiis-Ku-Nwiak, conveyed the appreciation of the Kultamise people to The Church of Pentecost for the wonderful gesture. He prayed that God would replenish everything the church has lost in the process and grant them the grace to do same for other vulnerable communities.

The General Secretary led some ministers present to plant trees on the premises of the clinic in line with the Green Ghana project aimed at restoring the country’s depleting forest cover.

The commissioning and dedication of the Kultamise Pentecost Clinic was well patronised by the traditional leaders including Naba Berie Hunsuo (Chief of Kultamise) and people within the Pusiga District and its environ. The event was also graced by a number of ministers of the church from the Tamale, Bawku, Bolgatanga, and Sawla Areas of the church.

Kultamse is a farming community in the Pusiga political district of Ghana and falls within the Bawku Area of The Church of Pentecost. The muslim-dominated community is located over the banks of the Kulpelgu River and has a population of over 3000 people. This year alone, seven lives have been tragically lost due to poor access to healthcare. With this new facility, residents (especially pregnant women) of the community and those in the surrounding towns are optimistic that they can now receive better healthcare (antenatal care) and would not have to sometimes trek all the way to Pusiga for medical treatment.