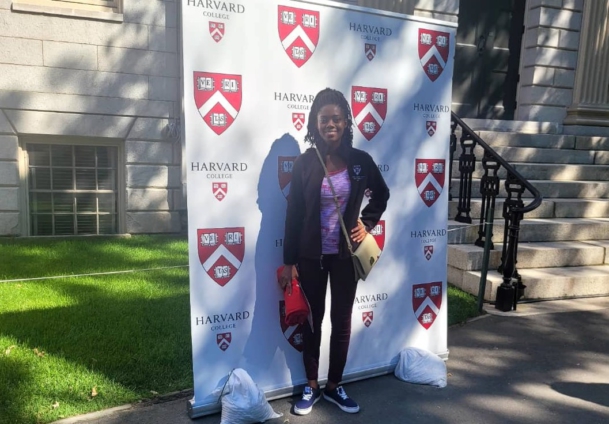 The 2021 National Science and Maths Quiz (NSMQ) poster girl, Francisca Lamini, has started her pre-med programme at Harvard University in the US.

The former student of Keta Senior High School (KETASCO) seems very excited about her prospects as she shared her feeling in a Facebook post.

She formed part of the KETASCO team that made history when they qualified for the finals of the NSMQ that year during which she caught the public eye.

Recounting the sequence of events after she left Ghana on August 16, the scholar explained that she has learnt so much already.

She showed appreciation to her benefactors and donors who made her journey to the prestigious college a success.

“I want to thank Ghanaians for the love they showed me after the NSMQ. It was overwhelming,” she added.

She is embarking on the academic journey on a full scholarship.

The announcement of her admission into the prestigious institution came earlier this year.

The Chair of Harvard Interviews in Ghana, Sangu Delle, wrote “…I can confirm that Francisca Lamini was granted admission to Harvard College (undergraduate) on a full scholarship.”

She was a student of KETASCO, which made history when they qualified for the finals of the National Science and Maths Quiz.

Though her school did not win the ultimate prize, she received praises for being the only female in the grand finale of the popular quiz show in the last eight years.

Notwithstanding, Francisca scored straight As in the private Nov/Dec WAEC examinations and the just-ended West African Secondary School Certificate Examination (WASSCE) when the results were released on December 8.