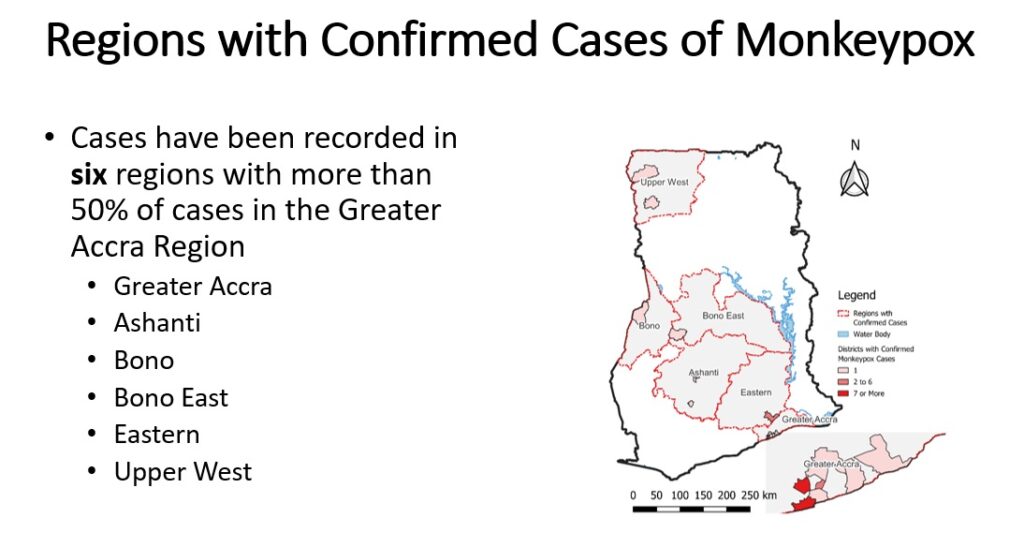 The total confirmed cases of the monkeypox outbreak in Ghana is now 34 with the cases recorded in six regions. More than 50 percent of cases are in the Greater Accra Region.

The Ghana Health Service (GHS) has said Greater Accra, Ashanti, Bono, Bono East, Eastern and Upper West are the regions where the cases have been identified.

The monkeypox outbreak was Saturday (July 23, 2022) declared a global Public Health Emergency of International Concern (PHEIC) by the World Health Organization (WHO).

The classification is the highest alert that the WHO can issue and follows a worldwide upsurge in cases.

It came at the end of the second meeting of the WHO’s emergency committee on the virus.

The last confirmed case in Ghana was on July 15th 2022 and the ages of cases range from 9 months to 45 years.

No fatality has been recorded among cases with majority of cases being male, according to the GHS.

At a press briefing in Accra on Sunday [July 24, 2022], the Director General of the GHS, Dr Patrick Kuma-Aboagye said District Rapid Response Teams and Case Management Teams have been oriented on Monkeypox Outbreak Response Measures and that dissemination of WHO Preliminary Guidelines on Case Management are underway.

In collaboration with the Veterinary Services Department, the GHS is conducting assessment in the affected communities, Contact Tracing and follow-up and Enhanced education in schools and communities.

Touching on the outlook, Dr Kuma-Aboagye said Ghana’s Public Health system is strained with several public health emergencies and that the risk of widespread Monkeypox cases exists but does not pose a major threat.

He added that the threat of Marburg virus disease spread exists but low and that adherence to protocols and infection prevention and control strategies remain crucial in addition strengthened continuous surveillance activities for early detection and adequate containment.

In contrast to past sporadic cases linked to travel to endemic countries, health officials have not confirmed the source of infection for the current outbreak, which is primarily centered in Europe.

Human-to-human transmission occurs among people in close physical contact, with the increase in recent cases linked to sexual contact, suggesting that the virus linked to the disease can be sexually transmitted.

The current outbreak highlights the importance of vigilant safe sexual practices and suggests monkeypox can be transmitted while the infected person displays few or no symptoms; however, the risk is currently assessed as low for individuals not routinely engaging with multiple or anonymous sexual partners.

Monkeypox does not naturally occur in Ghana; most cases are reported in West and Central Africa, primarily in the DRC, Nigeria, and Cameroon among individuals who report contact with wild primates or other mammals which may harbor the disease. The last confirmed monkeypox outbreak in Ghana was reported in 2003.

Monkeypox is caused by a virus that belongs to the same family as the virus that causes smallpox.

However, monkeypox is not the same as smallpox, and it does not have the same capacity for rapid human-to-human transmission.

Symptoms typically appear 6-16 days after exposure but can develop up to 21 days after exposure. Symptoms generally include fever, headache, muscle aches and backaches, swollen lymph nodes, chills, exhaustion, and a distinctive rash characterized by lesions that progress through several stages before falling off.

Public health officials have advised the practice of basic health precautions, including frequent handwashing with soap and water, covering the nose and mouth when coughing, and avoiding obviously ill individuals and addition to avoiding overcrowded areas, such as nightclubs, and consider using safe sexual practices, such as physical barriers (condoms), in countries reporting monkeypox transmission. Seek medical attention if symptoms develop within two weeks of being in affected areas.