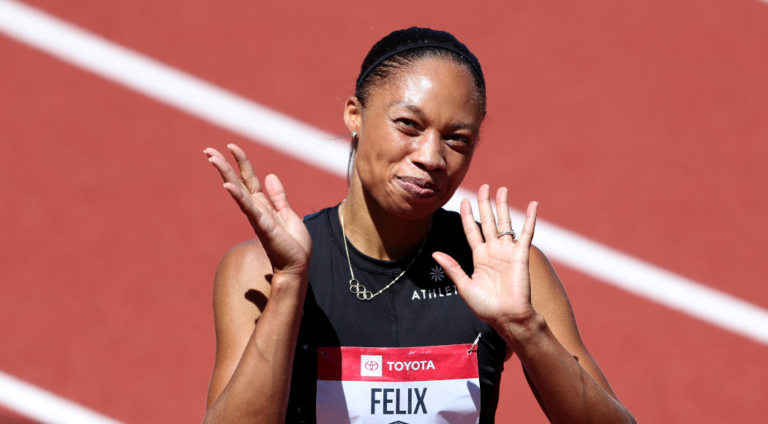 EUGENE, OREGON - JUNE 25: Allyson Felix acknowledges the crowd after she competed in the Women 400 Meter Dash Final during the USATF Championships at Hayward Field on June 25, 2022 in Eugene, Oregon. (Photo by Sean M. Haffey/Getty Images)

Ghana’s national 100m record holder Benjamin Azamati, and 200m record holder Joseph Paul Amoah will fight for semifinal slots on the first day of the World Athletics championships. The men’s 100m begins on the opening day of the competition with preliminary round action at 12:30pm (GMT).

The most successful medalist in World Athletics Championships history (18), Allyson Felix, will be competing in her final World Championships.

Despite failing to qualify in her pet 400m event, trials secured her a discretionary pick to be on the mixed 4x400m relay.

The event which concludes the night could see Felix pick up a 14th World Championships gold of her career.

Two other finals are set for Day 1, in the women’s and men’s 20km race walks, which will finish at Autzen Stadium.

Joy Sports will keep you across with updates from the 2022 World Athletics Championships. Here’s the full schedule on day one.