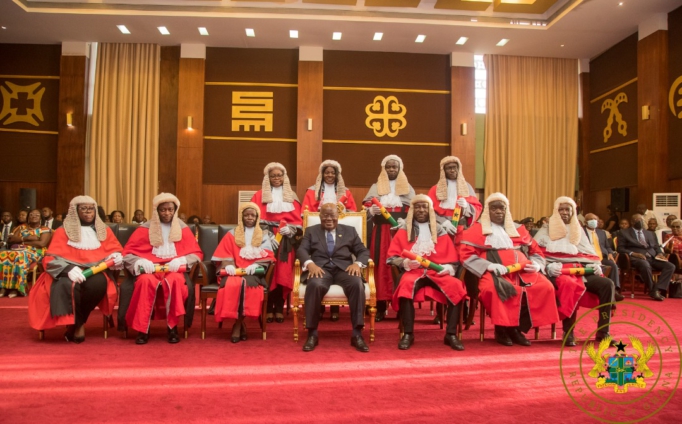 President Nana Akufo-Addo says 60 district courts, 60 bungalows for judges, and three new high courts for three of the six newly created regions will be commissioned before the start of the legal year in October.

According to him, government has taken note of the inadequate numbers of courts in various parts of the country, resulting in citizens travelling long distances to gain access to courts, and has decided to remedy this situation

Speaking at the swearing-in of 10 new High Court Judges on Monday at Jubilee House, the President stated that government, through the Administrator of the District Assembly Common Fund, is constructing 100 new courts and bungalows for Judges in all 16 Regions of the country.

“Sixty percent of these courts and bungalows have been completed and will be commissioned before the start of the legal year in October. The remaining 40 percent will be duly completed and commissioned by the end of the first quarter of 2023,” President Akufo-Addo said.

He continued, “six new Regional High Courts are also being constructed in the newly created regions, i.e., Ahafo, Bono East, North East, Oti, Savannah and Western North. Three of the Courts, that is those in Ahafo, Bono East and Oti Regions, will be completed and ready for commissioning, again, before October. The other three, those in North East, Savannah and Western North, which are at 80% completion, will be ready for commissioning by the end of the first quarter of 2023.”

It will also be recalled in April last year, the President cut the sod for the commencement of work on a new, modern Court of Appeal complex in Kumasi, together with 20 townhouses and a guesthouse to serve as permanent residences for the Court of Appeal Judges based in Kumasi, who will be mandated to handle appeals from the northern part of the country.

President Akufo-Addo noted that “they will be completed and commissioned in September”, adding that “two hundred and ten vehicles were, earlier this year, distributed to all judges in the Supreme Court, Court of Appeal, High Courts and Lower Courts.”

These, the President reiterated, are all initiatives being undertaken by government to strengthen the capacity of the Judiciary.

High Court Judges
Swearing the new High Court Judges in, upon the advice of the Judicial Council, given in accordance with the provisions of article 144 clause 3 of the Constitution, he indicated that they are eminently fit and qualified for the position of Justices of the High Court, and have the impartiality of mind and independence of spirit necessary to hold this high office.

With the High Court described as a superior court of record, with original, general jurisdiction as a tribunal of first instance, President Akufo-Addo told the new Judges to exhibit honesty, integrity and sound knowledge of the law.

“A corrupt or incompetent judge is a danger to the public interest and judicial administration. The situation, where judges proffer judgements on the basis of decisions from lower courts and cite them as law, is not acceptable, and even less so when judges cite no authority at all for their rulings and give orders without reasons,” he added.

The President continued, “You must be learned, know your case law and ensure your decisions and judgements are properly motivated. The principle of stare decisis, the ancient common law doctrine of precedent, has been, and continues to be the time-honoured foundation for the coherent development of the law, and should not be lightly discarded.”