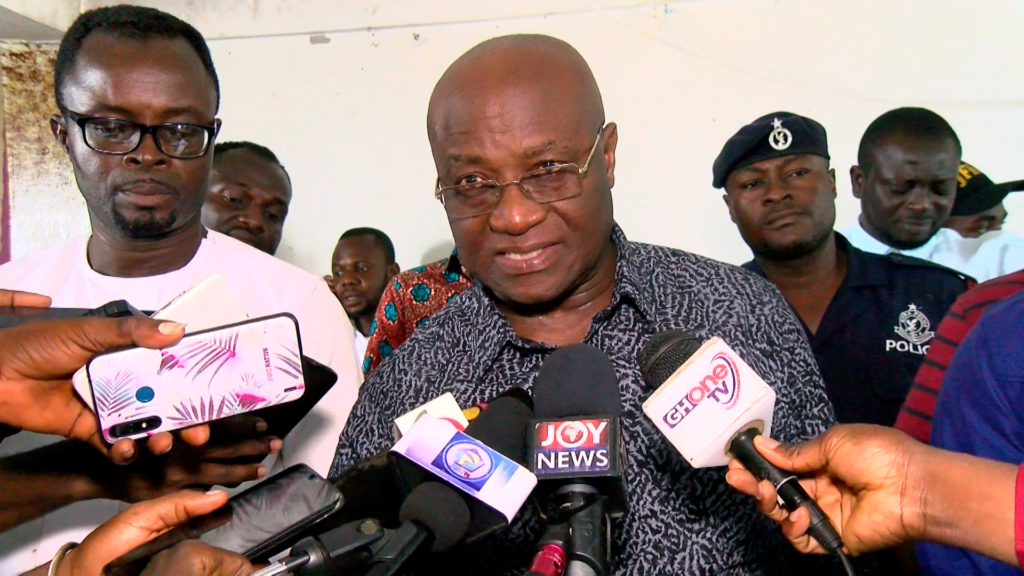 Member of Parliament for Suame, Osei Kyei-Mensah Bonsu says he is not worried over the conduct of agitated artisans and spare parts dealers at Suame Magazine who pelted him and his entourage with sachet water and other items.

A swift police intervention saved the MP, who is also Majority Leader and Minister of Parliamentary Affairs from being attacked by angry artisans at the Suame Magazine industrial hub over delays by the government in fixing the deplorable Suame Roundabout-Maakro stretch of the main Kumasi-Techiman Road which they say is not only hampering businesses but also threatening lives.

But Mr. Kyei-Mensah Bonsu in a media interview moments before he was whisked into a police vehicle said he is not worried over the conduct of his constituents.

“I am the face of government so if they are really angry that it’s been a while since the scrapping of the surface and dust is killing them, certainly when they see any government official, they will vent their spleen on the person so I am not worried.”

What appeared a reactionary visit by the Member of Parliament for Suame to listen to concerns of his constituents over deplorable roads turned hostile on Monday.

Osei Kyei-Mensah Bonsu and his entourage, including the Municipal Chief Executive for Suame, Maxwell Ofosu Boakye were surprisingly met by hostile artisans who chanted war songs as they threw sachet water and other items at the officials.

Mr. Kyei-Mensah Bonsu, who was surprised at the action, continued to hang around the conference room where a meeting with representatives of artisans, spare part dealers and GUTA executives had been scheduled to take place.

The artisans later regrouped as they chanted more war songs.

They accused government of being insensitive to their plight as the Suame Roundabout-Afrancho stretch still has pot-holes despite a section being scraped by Joshob Construction, contractors working on the rehabilitation works.

“We threw a lot of sachet water at him. As for the water, we threw a lot at him,” angry Kwasi Bona told Joynews.

The Majority Leader, who has represented the Suame constituency since 1996, told the press he understands the concerns and conduct of the agitated artisans.

“Last week, here at Suame Magazine, there was a major demonstration. It had to do with the refurbishment of and the reconstruction of the main highway, that is, from Suame Roundabout through Maakro to Afrancho.

The road had developed several potholes and it was causing some accidents and because of that, the Minister of Roads and Highways awarded a contract to a contractor to refurbish and indeed reconstruct the road.”

He assured the contractor will resume work after experiencing acute bitumen shortage to  address concerns of the agitated artisans.

Under strict police protection, the MP was whisked away to safety in a police vehicle which was chased by the mob.