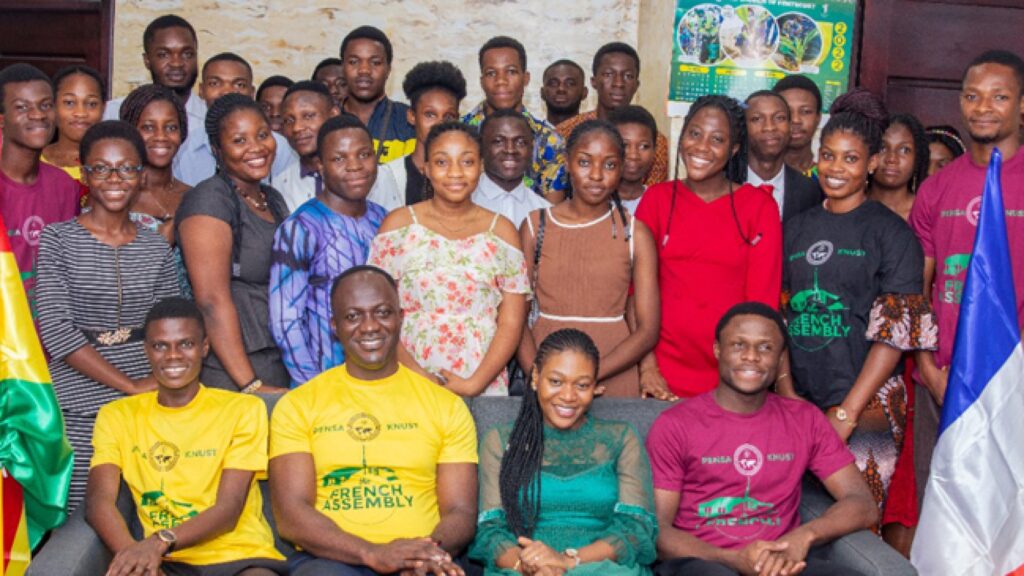 The inauguration of the French Assembly of the Kwame Nkrumah University of Science and Technology (KNUST) branch of the Pentecost Students and Associates (PENSA) was greeted with rapturous applause and excitement by the over 2000 congregants gathered at the PENSA-KNUST church auditorium yesterday.

The inauguration service was officiated by the KNUST Campus Minister of The Church of Pentecost, Pastor Johnathan Ebo Quaye, with support from Pastor Thomas Ayamboya (Home and Urban Missions Pastor for the Kumasi Sector)

Speaking at the event, Pastor Ebo Quaye, an alumnus of KNUST, recounted how PENSA-KNUST started with an initial membership of 23 students and has now grown into a vibrant campus Christian group with thousands of members. He was, therefore, hopeful that the new French Assembly would also become a strong ministry on campus in some years to come.

“Today will forever remain in the annals of history and we pray that this seed we have sown today would germinate and bear fruit in Jesus’ name,’” the Campus Pastor said as he inaugurated the French Assembly.

Pastor Thomas Ayamboya, in a brief speech, said that the inauguration of the French Assembly is a great manifestation of the five-year strategic vision of The Church of Pentecost (Vision 2023) at work.

He said that language is magnetic and has the power to bring people together towards the achievement of a common goal, hence the significance of the establishment of the French Assembly.

He was, therefore, confident that the new Assembly would help minister to the spiritual needs of international students and other French-speaking people on campus.

Delivering a sermon on the topic: “Who Has the Final Say” based on John 11:1, Pastor Quaye explained that, although there are negative elements and forces that affect believers, their sole consolation is in the fact that the Sovereign God they serve always has the final say on all issues.

According to him, there is always a hidden reason why God allows His children to endure suffering. He further noted that God sometimes allows suffering on the righteous to bring glory to Himself, to build their faith, and to cause others to believe in Him because of their testimony.

Pastor Quaye, therefore, advised believers to keep holding on to their faith in the Lord and to trust that in His appointed time, He would turn things around.

Among those present at the historic event were Mrs Joana Dwomoh Quaye (Wife of the Campus Pastor), Elder Francis Amihere (President, PENSA-KNUST), other executive members of PENSA-KNUST as well as some international and French-speaking students.