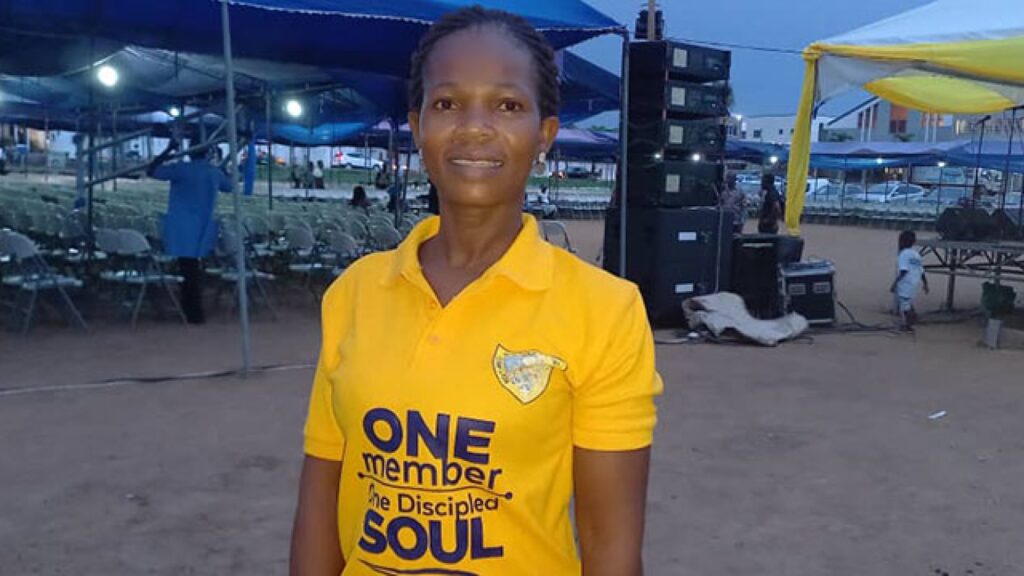 For the first time in three years, members of The Church of Pentecost in Ghana could once again converge at various open spaces to observe this year’s Easter Conventions.

One person who is really relishing this moment is Mrs. Vivian Darko Addo, a member of the Bethel Assembly in the Osu District of the Church.

In an interview with PENTECOST NEWS at the event, Mrs. Addo stated that the last time she and her team took part in an outdoor Easter Convention was in 2019, right before the advent of the COVID-19 pandemic.

COVID-19 was declared a global pandemic by the World Health Organisation (WHO) when the outbreak reached an alarming peak in the year 2020; compelling nations across the globe to introduce extreme measures to help manage and reduce the spread of the deadly virus.

It was for this same reason that on March 30, the government of Ghana imposed a lockdown on the Greater Accra and Greater Kumasi Metropolitan areas for two weeks. Enshrined in the lockdown directive, was the suspension of all public gatherings, including church services, with all individuals urged to stay home as much as possible.

These interventions, although necessary at the time, had a devastating impact on the Church, especially on the 2020 Easter Convention, which was only a few weeks away.

Despite the challenges, the Lord endowed the leadership of the Church with the wisdom to introduce new ways of doing things to navigate the situation. One of the novel initiatives introduced during the period was organizing the Easter Convention online via Pent TV and the various social media platforms of the Church. Thus, for the first time in the history of The Church of Pentecost, members took part in the convention virtually from their homes.

Two months later (on May 31, 2020), the government eased some restrictions on religious activities, leading to the resumption of church services. This, however, came with some conditions such as: a mandatory one-meter rule of social distancing between congregants, a mandatory wearing of nose masks, a mandatory two-hour length of service, and a maximum of 100 congregants per service. In spite of these restrictions, the Church relished the opportunity to resume in-person services and to hold the Easter Conventions indoor the following year.

While acknowledging that the 2021 Easter Convention was a significant step forward compared to that of 2020, Vivian revealed the restrictions still had an adverse impact on the work of the evangelism team.

“From the perspective of the evangelism team, I believe the last two years has been quite difficult for us. We have had to be more strategic in our evangelism efforts in 2020 and 2021, but with relatively low results,” she said.

According to her, the team mostly resorted to house-to-house and personal evangelism to win souls during the period, but that did not yield much results (compared to the souls won during outdoor conventions in the past).

She added: “During the indoor convention, the members were also encouraged to invite people to the service, but we observed that it was not very effective, because most of them left for work early and came to the service right from work, so they were unable to invite people within the community. So, it was difficult to get non-members attending the event.”

Following a rapid decline in cases, President Akufo-Addo announced the relaxation of most of the COVID-19-related restrictions in his 28th COVI D-19 Update on March 27, 2022. The new directive allowed for the resumption of church meetings to full capacity and beyond two hours. He also directed that the wearing of nose masks in public spaces was no longer mandatory for citizens who are fully vaccinated.

Vivian, a mother of three, said she received the announcement with great joy, because it has made it possible for this year’s convention to be organised outside the auditorium.

“We thank God for this directive. It is always good to have Easter Convention outdoors for many reasons. As an Evangelism team, it is easier for us to evangelise when conventions are held outside. The singing, dancing and powerful word ministrations capture the attention of people and draw a lot of onlookers to the event grounds, which gives us the opportunity to draw close to them and help lead them to Christ,” she explained.

Vivian further observed that church members’ approach to conventions held indoors is not the same compared to that of outdoor conventions.

“When conventions are held indoors, it usually feels like a ‘normal’ service because all our church meetings are held inside. But when held outside, a lot of people really look forward to it: this is partly because having the conventions outside gives it more of a festival feel, which is what Easter is all about; a celebration of the death and resurrection of Jesus Christ. So, we thank God that we have resumed outdoor conventions again,” she said.

Due to the new directive on nose masks, majority of members who thronged the Arko-Adjei park for the La Zone Easter Convention were seen without nose masks – a scene reminiscent of past Easter Conventions before the COVID-19 pandemic.

Reacting to the nose mask directive, Vivian said, “It is great news indeed. The truth is, some of us have gotten so used to the nose masks that we sometimes forget that it is no longer mandatory. So, it would take some time to get used to life without it.”

Mrs Vivian Darko Addo, together with the hundreds of patrons who participated in the opening session of the La Zone Easter Convention, which included the General Secretary of the Church, Apostle Alexander Nana Yaw Kumi-Larbi, were very jubilant and praised the Lord for the return to “normal” life.

Vivian is confident that this year’s convention could record more souls as compared to the previous two years, and hopes that through the conventions being organised nationwide many would come to the saving knowledge of Jesus Christ.

The La Zone Easter Convention, which is being held under the auspices of the La Area Head, Apostle John Osei Amaniampong, has as its theme: “Being Equipped with the Resurrection Power to Possess the Nations” (Philippians 3:10). Also present at the event was Apostle Lt. Col. Benjamin Godson Kumi-Woode (Resident Minister, Burma Camp Worship Centre).