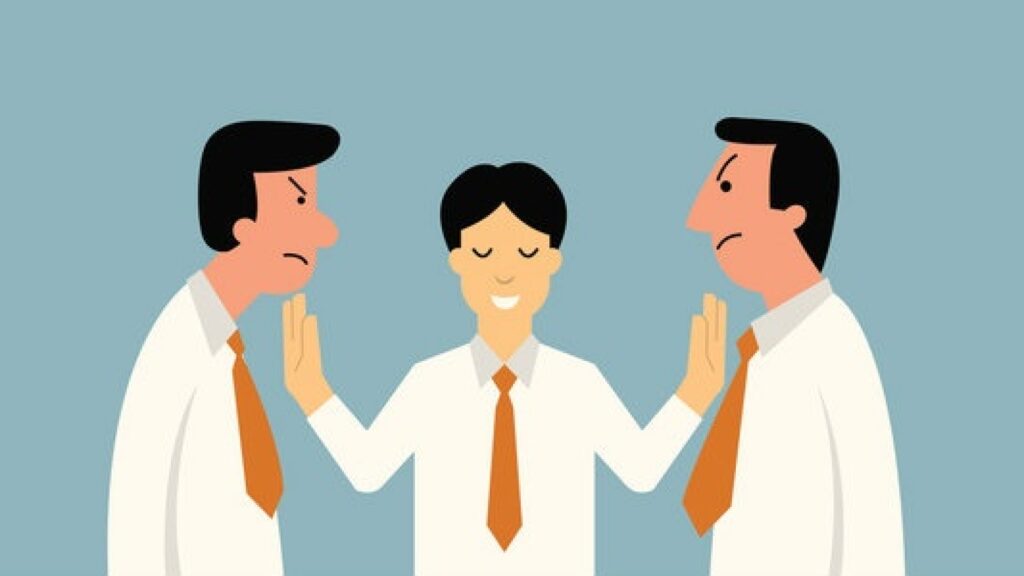 We all have had or been involved in one form of conflict in our workplace or the marketplace. Thus, we have all seen or experience conflict. So it is part of life, we cannot avoid it entirely because we do not control other people’s emotions and actions. But in Luke 6:27-36, Jesus Christ gave a beautiful and life-transforming roadmap to address situations of conflict.He says “Love your enemies, do good to those who hate you, bless those who curse you, pray for those who abuse you” (Luke 6:27-28). Wow! Is this possible at all? So Jesus, you are saying that I should pray for those I know are my enemies, those who wish that I don’t get that promotion, those who desire I fail and set trap for me? I should do good to them? Are you serious Jesus? Do you how know bad that brother or sister hurt me?

Interesting and difficult as it may seem, Dr. Luke leaves no doubt that this is a teaching for the economic and business world as well, as he emphatically relates the story to lending money. “Lend to your enemies, expecting nothing in return” (Luke 6:35). Let me be clear on this point, this does not and is not like a business or commercial lending strategy, no! However, it is meant to help us understand this narrative so well. Whatever place of influence or power we have been blessed to occupy is only meant to serve and cause positive change and enduring legacy but not meant to crush people we are in conflict with. Saul is a classic example here. Using the entire army of Israel to chase after a shepherd boy, David, with sole purpose of crushing and killing him. But David had a different understanding, even when Saul fell into his hands and had the opportunity to kill him with just a strike, he refused to do that, later Saul confessed that “You are righteous that I”. This is a human being, flesh and blood like us. Let’s apply this to our workplaces.

Jesus is saying that we must work for the good of those we are in conflict with…difficult eh? This is not to say we should avoid conflict, because like I said earlier, we don’t control other people’s behaviours and emotions, but only ours. It also does not mean the Christian worker should not compete in his field, no. But it does mean, for example, that if you are competing with a co-worker for promotion, you must help your co-worker or opponent do their work as well as they can, while doing yours excellently knowing that promotion comes from God (Gen. 39:5, Dan. 2:42, Psalm 75:7) and it’s a reward for hard work, diligence dedication and above all, uprightness, adhering to the rules of engagement.

Here, we are not to crush our competitors. While working as Business Development Manager years ago, I had the opportunity to engage clients together with several colleagues from other banks pitching for the same business. Sometimes, we did presentations in turns and you hear others throwing jabs and tantrums in their efforts to sell their products, some even condemned their opponents institutions. One of the timeless lessons I had from my supervisors was, “always sell the differentiating factor when pitching”, that is, what makes your product unique and valuable from the rest on the market? Sell value! With this we won many without crushing words. Crushing your competitors in an evil way won’t make you better, you rather attract God’s wrath because you are against his word. Today, some companies uses  frivolous lawsuits, monopolization, false rumors, stock manipulation, and the likes to crush their competitors. Even nations uses natural resources to blackmail other nations to have leverage ver others. This may seem a strategic imperative, but it’s wrong if we pass it through the prism of the scripture as Prof. Kwame Bediako suggested. Some even uses social media fake videos to destroy businesses of their competitors. This is evil and God will judge every action, thoughts and intents of men so we need to be very careful in our walk with him.

The Puritans were very business minded Christians, believed in the dignity of hard work and labour. Many were leaders in their respective spheres – colleges Presidents, Professors, CEOs, Ingineers, Lawyers, Senators, Judges, etc. They recognised that Jesus Christ perspective on life must permeat every sphere of their everyday business life, thus, establishing his kingdom on earth. They therefore, taught a lot about vocation and admonished Christians not to be lazy like we have today, supported but lazy government policies and liberal politicians who have no idea about God’s big idea about work and enterprise for effective human living.

Conflict is part of human existence. On our part, we can avoid it but we cannot control the repugnant behaviours and attitudes of others, and so conflict is bound to happen. When it does happen, the road map is clear from Jesus Christ. If followed, it will liberate us – spiritual, social and economic wholeness because we have thought and acted right. This is certainly not an easy route my friend but those who travel it have great stories to tell at the end. Jesus Christ did it, on the cross he made pleadings and asked for forgiveness for his killers. Nelson Mandela travelled this difficult path after 28 solid years  in prison, he loved his enemies, Joseph did it to his brothers. Mahatma Ghandi showed it to the Brits… Such people are bigger in heart and in the world and are Inflencers. Reflect on this!