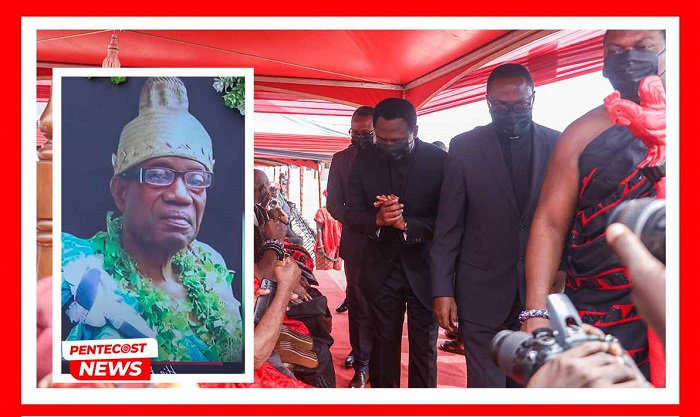 This happened on Thursday, March 17, 2022, at the La Royal Palace Grounds in Accra.

The Chairman of the church, in a brief address said that his visit was to pay his last respect to the late La Mantse and the family as they prepare for the funeral.

He added: “We came here to mourn and sympathise with you for the loss of our dear father.”

He prayed that God will strengthen the family and the La Traditional Council throughout the funeral and burial of the Paramount Chief.

Nii Adjei Koofeh IV, La Shikitele of La Traditional Council and Supreme Head of Nmati Abonase clan, in response, thanked the Chairman and The Church of Pentecost for commiserating with them in this sorrowful moment.

He iterated that the La Traditional Council will continue to maintain a strong relationship with The Church of Pentecost for growth and development in the La State.

The Finance and Administrative Director of the church, Apostle Lawrence Otu-Nyarko, on behalf of the Chairman, donated a cash amount and some assorted items consisting of ten (10) cartons of soft drinks and 20 cartons of bottled water to the La Traditional Council to support the burial arrangements.

The final funeral rites of the La Mantse has been in session from March 14, 2022, and is expected to end on March 20, 2022, at the La Royal Palace Grounds in Accra.

The late Paramount Chief of the La State, Nii Dr. Kpobi Tettey Tsuru III, died in January, 2019. He celebrated 30 years of enstoolment before he passed away.

16 hours ago Samuel Ansong
We use cookies on our website to give you the most relevant experience by remembering your preferences and repeat visits. By clicking “Accept”, you consent to the use of ALL the cookies.
Cookie settingsACCEPT
Manage consent