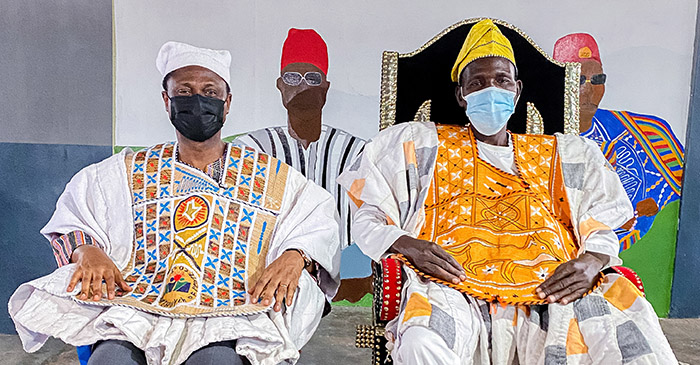 Apostle Eric Nyamekye, Chairman, The Church of Pentecost, has paid a courtesy call on the Chief of Zebilla, Naba Azumbilla Aboya Ndago III.

The visit took place on Wednesday, February 23, 2022, at the Chief’s Palace, Zebilla, in the Upper East Region.

Apostle Nyamekye was welcomed by the elders and some youth in the community.

Naba Azumbilla Aboya Ndago III, in welcoming the Chairman, said that before The Church of Pentecost came to the community, there existed many churches, however, in a short while, the church has made tremendous growth and impact in the society.

“Don’t forget to pray for us,” he appealed to the Chairman, adding, “It is my hope for peace to return to Zebilla and its environs. The presence of the Chairman will bring hope, and peace in Zebilla.”

The chief further appealed to The Church of Pentecost to collaborate with the traditional authorities and build schools, hospitals, and clinics in the area. This, he, said will bring development and make the community benefit more from the church.

He pledged his readiness to give the church parcel of land for its development projects when the opportunity comes.

The Bawku Area Head, Apostle Eric Gyambibi Boateng, revealed that the church has built a clinic at Kultamise, constructed boreholes at the Zebilla mission house which is opened to the community, and currently constructing irrigation projects to help farmers in their farms as parts of its social services to the area.

In his response, the Chairman of the church said that it was expedient to call on the chief being the overlord of the town, adding: “We respect you as our leader so I have to pay homage to you before meeting my members.”

Talking about the peace of the area, the Chairman stated that it has been a long-standing issue. “I request that the youth would be advised to exercise patience, as we pray for the peace of Bawku and Zebilla,” he pleaded.

He thanked the chief and his elders for the continuous cordial relationship that exists between them and The Church of Pentecost.

Responding to the request made by the chief, the Chairman pledged to support them in consultation with the Executive Council of the church.

Out of appreciation, Naba Azumbilla Aboya Ndago presented to the Chairman a designed smock woven specially for him.

The Chairman thanked him for the kind gesture and in return donated 10 pieces of plastic chairs, packs of bottled water, and drinks, to the palace on behalf of the church.

In an interview with PENTECOST NEWS, the Chairman stated that The Church of Pentecost has decided to partner the chiefs to possess the nations, hence the establishment of the Chieftaincy Ministry.

“As a church, we will not be able to do it all. We have intended to influence all the stakeholders, especially the chiefs. Therefore, my visit to the Chief of Zebilla means that we want to connect to the palace,” he iterated.

He added: “If we partner with him [chief] and his subjects, we will be able to extend the Kingdom of God in this territory.”

Apostle Eric Nyamekye was hopeful that the partnership between the church and the chief will continue. He prayed for the chief and the entire Bawku Area for the development of the land and for peace to reign.

The Bawku Area has its administrative seat at Bawku with 19 districts, 285 church buildings, and a total of 36,000 members. The Bawku and Bolgatanga Areas are the two areas of the church within the Upper East Region.