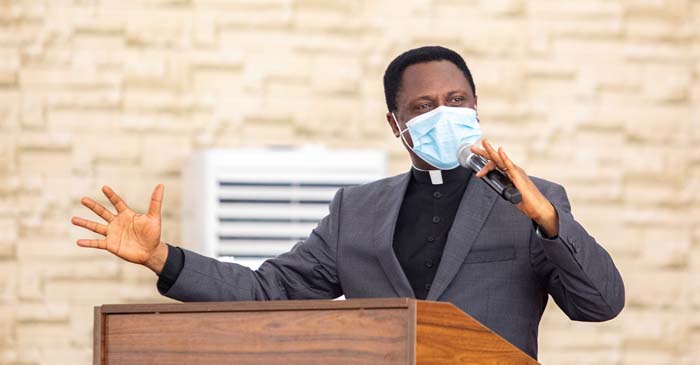 The Chairman of The Church of Pentecost Worldwide, Apostle Eric Nyamekye, has expressed grave concern about the clandestine move by some world leaders and powerful groups to suppress the celebration of Christmas, which marks the birth of Jesus Christ, the Saviour of the world.

According to the revered cleric, “Satan is jealous about Christmas, so he is doing everything possible to expunge the name of Christ from Christmas and make it an ordinary holiday.

“We are in a conflict situation because there are strong forces to cancel Christmas. It was the Europeans who brought Christianity to Africa, but today the same people are scheming to destroy it,” he said.

He added: “There are certain individuals in the nations if they become president today, they will cancel Christmas the next day. So, as Christians, we need to be serious about the celebration of Christmas.”

The Chairman, therefore, called on Christians to fully embrace Christmas and celebrate it as such as they gather together and proclaim the love of God to humanity through the offering of His Son Jesus Christ as the Saviour of the world.

Apostle Eric Nyamekye said this on Christmas Sunday when addressing members of the church in East Legon District of the Madina Area at the Peniel Assembly Auditorium to climax the 2021 Christmas Convention which was on the theme: “Jesus Christ – The Light of the World” (Isaiah 9:1-7).

He took time to explain the essence of Christmas and how some powerful anti-Christian groups and individuals are planning to suppress its global significance and commemoration.

Because of this, he stated, Satan is struggling hard through some global institutions to take God out of the scene and make the period a normal holiday where people will make merry and enjoy themselves without recourse to Christ who is at the centre of the celebration.

Apostle Nyamekye revealed that in December this year, the European Commission attempted and is still pushing hard to expunge the word “Christmas” and simply keep the period as “holidays” since they think that the word “Christmas” is offensive to non-Christians. This, he said, “is a tactical approach by the enemy to get Christ out of the minds of humanity.”

He said that the story was wrapped up in three prophetic songs of praise sung by three persons. Mary (Jesus’ mother) sang the first song called ‘The Magnificat’ (Magnifies) in Luke 1:46.

The second prophetic song of praise called ‘The Benedictus’ (Blessed) was sung by Zacharia, father of John the Baptist in Luke 1:68, while Simeon, the old prophet, sang the third song called ‘Nunc Dimittis’ (Now Dismiss) in Luke 2:29 during the naming of Jesus.

Focusing on ‘The Magnificat,’ Apostle Nyamekye revealed that Mary was chosen by God to bring forth the Messiah because she was a virgin and also feared God.

He indicated that God’s mercies extend to those who fear Him in every generation. Reading from Psalm 34:11-14, he stated that the fear of God is connected to the obedience of God.

“The fear of God is also about putting the will of God above ours, despite our feelings and perspectives on a matter,” he said.

He added: “The acid test for a good Christian is in how much the fellow fears the Lord.”

Apostle Eric Nyamekye advised believers to fear God and do His bidding to experience the mercies of God for their lives.

The service was like a homecoming for the Chairman and his wife, Mary who once served as a District Minister for the district after their return from missions in South Africa. The Chairman and his wife received a tumultuous welcome from the members amidst cheers and shouts of praises. On behalf of his family, Apostle Nyamekye thanked them for their support and prayers which have helped him rise to the top.

Present at the service were Apostle George Kwaku Narh (retired), and the host Minister, Pastor Patrick Kobina Bremansu, and his wife Gifty, among others.