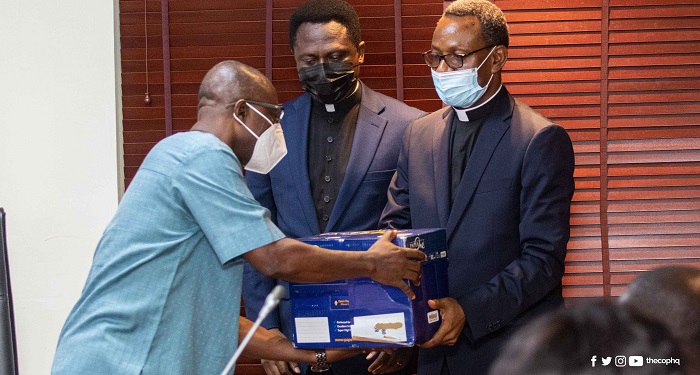 The Church of Pentecost has made a strong statement of support towards the legislation of the Promotion of Proper Human Sexual Rights and Ghanaian Family Values Bill when it presented six memos along with 15,000 signatories to parliament today.

The presentation, which was made along with other Christian groups and church denominations, took place at the office of the committee of constitutional, legal, and parliamentary affairs.

During the presentation, the Chairman of the Church, Apostle Eric Nyamekye, did not mince words when he voiced out the Church’s strong stance against the activities of LGBTQ+.

He said the church has a membership of over three million members, which forms 10 percent of the nation’s population, adding that, with these significant numbers, it is throwing its weight behind the passage of the bill.

“As a church, our concern is not about today, but the future. When we allow the activities of LGBTQ+ what would happen is that it would lead to same-sex marriages, which the President has said would never happen under his watch,” he said.

He added: “However if he allows LGBTQ+ activities to continue, although same-sex marriage may not happen under his watch as president, it will happen after he is no more president of the nation. Rather, what he should do is to stop it. He should close the door where it matters, and we are saying it should be now”.

Apostle Nyamekye urged parliamentarians to critically consider the bill and not to regard it as an issue of right, but one of morality. He also revealed that among the 15,000 signatories were trustees of the church, workers, and the youth. The memos, on the other hand, he said, were received from the Youth, children, men, women, workers, and theologians of the church.

Presenting a memo on behalf of the Methodist Church of Ghana (MCG), the Presiding Bishop of the MCG, Most Rev. Dr. Paul Kwabena Boafo, said the MCG has always held a strong stance against the activities of the LGBTQ+ and is therefore in full support of the bill laid before parliament for legislation. He said that attached to the memo of the mother-church are separate memos by the Accra Diocese and the Children’s Ministry of the Methodist church, who associate with the bill, describing “it as one for the future.”

Expressing the support of the Apostolic Church for the bill, the President of the ACG, Apostle Dr. Narh Ami, said that LGBTQ+has been a long-standing issue in the nation, and was glad that the bill has finally been brought to the fore to be addressed.

According to him, the activities of LGBTQ+has great consequences on the future, hence the need for the country to take a strong stance against it.

“As a church, we believe that when we make sexuality so fluid to the extent that anyone can just get up and say ‘I am this or I am that,’ it becomes difficult, and no nation has what it takes to deal with that kind of confusion. We also believe that God only made the male and female,” he said.

The Christian Council of Ghana (CCG), National Association of Charismatic and Christian Churches (NACCC), National Clergy Association, and Ghana Congress on Evangelisation (GHACOE) also formed part of the Christian delegation that presented the memos to the office of the committee of constitutional, legal, and parliamentary affairs. The memos were received on behalf of the committee by Mr. Owusu Mensah (Acting Deputy Clerk, Finance, Administration, and Legal Affairs), who assured them that it would be submitted to the committee for consideration.

Meanwhile, other Christian groups such as the Catholic Bishops Conference of Ghana and the Ghana Pentecostal and Charismatic Council (GPCC) have also submitted memos in support of the new private members’ bill.

They also argue that the new bill stems from its long-standing and consistent biblical position on the preservation of God’s original plan for marriage, procreation, and the preservation of the family value system, and any attempt to pervert this system would be fiercely resisted through all spiritual, physical and legal means.