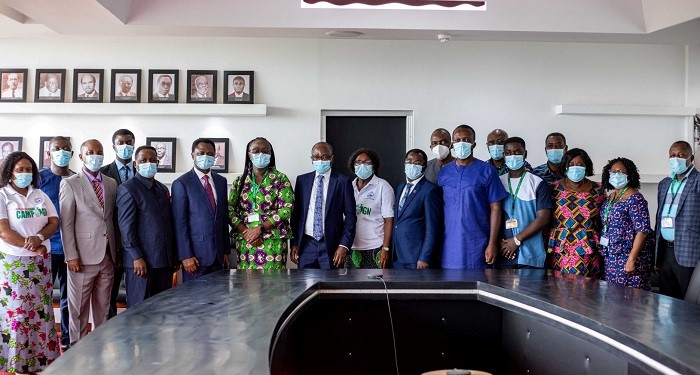 A delegation of The Church of Pentecost led by the Chairman of the church, Apostle Eric Nyamekye, today, Friday, June 11, 2021, paid a courtesy call on the Vice-Chancellor (VC) of the Kwame Nkrumah University of Science and Technology (KNUST), Prof. Rita Akosua Dickson at her office.

According to the Chairman, who is on a two-week working tour of the Ashanti Region, the visit was to congratulate Prof. Dickson on her appointment as the first female VC of the university and to pray with her for a successful tenure in office.

Interacting with Prof. Dickson, Apostle Nyamekye stated the need for the new VC to strive to leave behind a better legacy as the first female to occupy this high office in the university. To leave behind a better institution than she has inherited, the Chairman urged her to invest in people and build the capacities of the human resources around her.

Apostle Nyamekye also informed her of the church’s decision to assign a campus minister (a full-time minister) to the university to provide spiritual care and guidance for staff and students.

He noted that the campus network of the church in the university, PENSA-KNUST, currently boasts a membership of over 2,000 students, the church, therefore, deems it necessary to station a minister to see to the spiritual growth and development of the teeming numbers. He urged the university to welcome the campus minister with open arms and embrace him as a part of the university’s chaplaincy team.

Touching on the relations between the university and the church’s tertiary institution, Pentecost University (PU), the Chairman thanked KNUST for the effective mentoring they provided for PU which saw the institution receiving its presidential charter last year. He, however, called for continued partnership between both institutions to enable PU to achieve higher heights as has been attained by KNUST.

He was hopeful that the appointment of a former VC of the KNUST, in the person of Prof. William Otoo Ellis, as the current Chairman of the university’s council, would help strengthen relations between both institutions.

In response, Prof. Dickson expressed gratitude to Apostle Nyamekye for his visit. She lauded the church’s decision to assign a full-time minister to the university, noting that KNUST prioritises providing employable skills for students as well as the formation of moral and godly character.

She congratulated the PU on attaining the status of a fully-fledged university and assured the Chairman of her outfit’s commitment to forging stronger ties with the PU, especially with a former VC of KNUST, Prof. Otoo Ellis, in charge.

Professor Dickson also touted the various projects undertaken by the church on campus, such as constructing bus stop shelters and encouraged the church to keep up the good work of impacting society.

She reiterated her commitment to hand over a better university than she has inherited and called on the church to continue to bear the university up in prayer and to support KNUST in whichever way possible.

The visit ended after a word of prayer was said for the VC and the university.