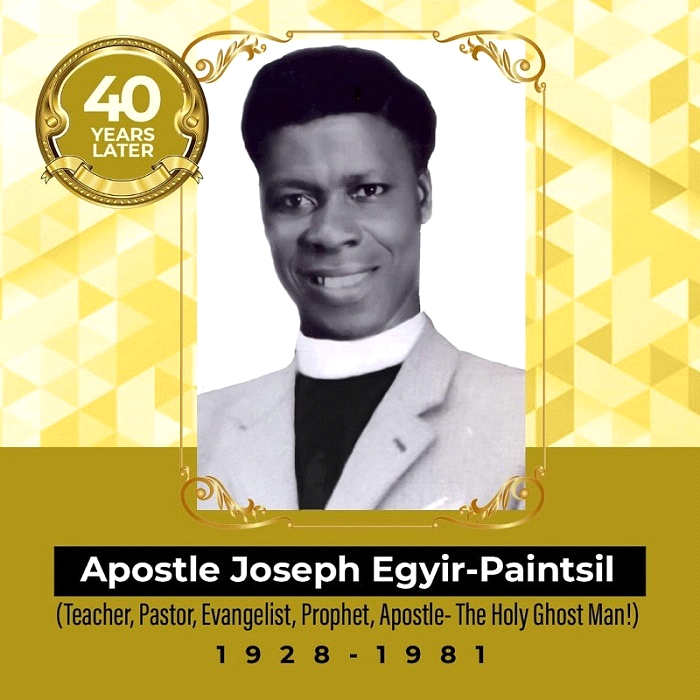 He stumbled upon Jesus at the age of 18, while on his way to the movies in pre-colonial Ghana, something that was considered the epitome of worldliness at that time. And yes, despite his strict Methodist upbringing, after returning from school he was steep into the secular life. Smoking, drinking, bad companies, you name it. Besides, it was December 31st and who wouldn’t want to have good time?

But this night was different. He overheard a tall, slender Caucasian male preaching from Genesis 3:9. He screamed with a sharp Irish accent, “Adam, where art thou?” Then the call changed to “Joseph, where art thou?” He was Joseph, but the Irish man didn’t know him from Adam! The call echoed in his heart, after a short consideration he abandoned his friends and responded to the call to give his life to Christ!

The Irish man was Pastor James McKeown, the founder of The Church of Pentecost, the 18-year-old youth was the Late Apostle Joseph Egyir-Paintsil!

In a matter of days, he was baptized into water and later the Holy Spirit. Afterwards, “In his own words, quoting John Wesley, “My heart was greatly warmed.”

In hindsight, his heart was more than warmed, it was set on fire! He pursued the things of God with fierce tenacity! Shortly after the baptism with the Holy Spirit, he joined a prayer team called the “Bombing Squad!” A group, James McKeown took keen interest in, and not surprisingly, most of the young men in that team became prominent ministers.

Joseph was then called into full-time ministry at 21 years.

He became an apostle and the first general secretary of the Church of Pentecost at 23 years of age! The youngest person to serve in the position and the longest serving, holding the position for 29 years until his untimely death. By this, he laid a solid administrative infrastructure for the church; vestiges of which remain till today!

A handsome, sharp, and charismatic young man who knew his value and placed an outsized value for the things of God!

He travelled the length and breadth of the country to establish new churches and strengthen old churches. He did this mostly with public transportation. When he finally got a vehicle, it was a battered yellow Peugeot handed down after being used extensively. Due to financial constraints he had to make do with the vehicle!

The automobile was notorious for breaking down during long journeys. It broke down under torrential tropical rains causing Pastor Paintsil along with the few passengers to push the car over a mile!

When he preached, the heavens came down. A powerful charismatic young man who taught the word of God with power and clarity.

He was known for baptizing people in water and fire at the same time, as most of the people he baptized in water came out speaking in diverse tongues!

He had an incredible healing ministry. A child suffering from seizures was healed instantly under his ministration. Another child who had developed epistaxis, (nosebleeds) for 3 days straight was prayed for at the parsonage and received immediate healing!

He had a powerful prophetic ministry! In fact, after his death, James McKeown disclosed most pastors and apostles called under his tenure were called through prophetic messages delivered by Rev. Paintsil.

When a young military man, Felix Elvis Antwi stayed with him for 2 weeks on a military assignment in Accra, his life was transformed fundamentally. He recalled Apostle Paintsil waking up at 4:30am consistently on a daily basis, pacing his front porch while praying. His family would later join him at 5am for devotion!

After returning from work, late Apostle Paintsil will head to Labadi beach, yards away from his residence to pray some more! This prayer life, and commitment to God, left an indelible impression on the military man. When Felix got into ministry, he mimicked Apostle Paintsil’s pattern of ministry!

He also witnessed and emulated his love for his wife and the intentionality in his parenting. Again, traits the young military man replicated in his life!

He embraced the educated, and well-to-do, into the church which was predominantly for people on the lower end of socioeconomic spectrum at that time.

He chaired the first national conference of the Pentecost Students and Associates (PENSA) in 1980.

He spearheaded the formation of Pentecost Fire as the church’s official mouthpiece and become the co-editor of publication.

He shared James McKeown’s vision of productive collaboration with other churches and was instrumental in forming Ghana Pentecostal Council (GPC).

Rev. Paintsil was a visionary who saw the church decades away and positioned her in the light of what he saw. He purchased prime real estate/lands for the residences of the Chairman and General Secretary, which continue to be used after over half a century.

Between 1953 and 1962, The Church of Pentecost hit its most tumultuous period. A portion of the African leaders planned a daylight coup against the founder, James McKeown. While James McKeown was vacationing abroad, a team comprising mainly of elders, impassioned by brewing nationalism of the time, plotted to wrestle the chairmanship plotted out of the hands of James McKeown and replace him with an African Chairman. Not only was Rev. Paintsil one of the most influential voices at the time, he was also a blood relative of Apostle Anaman, the deputy chairman and the proposed African chairman.

All eyes were on Rev. Paintsil as to where his allegiance will fall. Along with the attention came attacks, both spiritual and physical. But none of that shook Rev. Paintsil. He pledged his allegiance to the founder of the church and his God! He stood his ground and actively steered the church through this turbulent period. He was one of the founder’s most trusted confidants. The chaos and schism went all the way to the then President of Ghana who advised the name change. Rev. Paintsil was part of the leadership that rebranded the church from Gold Coast Apostolic Church to the Church of Pentecost. After the meeting, President Kwame Nkrumah, remarked to his cabinet, “this Paintsil man is very intelligent and hardworking, His church will succeed!”

And yes, his church succeeded!

Today, the church he fought and toiled for is 3 million people strong, in more than 100 countries around the world and actively growing.

Exactly 40 years ago today, the world and The Church of Pentecost lost this preeminent founding father. A man among men, a person of unparalleled calibre, charisma, and grace. After a revelation of his passing in December, he addressed the whole nation of Ghana in February, and on this very day, March 22, 1981, at a prime age of 53, with a promising future ahead, he went to be with the Lord. Late Apostle Joseph Egyir-Paintsil has left a legacy that worthy of emulation by this and future generations. He has left behind a spiritual, ministerial and an administrative inheritance that will speak for generations to come!

The life of late Apostle Paintsil, is a reminder of how ready our God is to use all who avail themselves! The Holy Spirit is no respecter of persons, and He is no respecter of age either! A 23-year-old today may be considered an unsettled college graduate who needs another decade to decipher the direction of their lives. But 23 years in the sight of God can be an Apostle, manifesting all 5 ministering giftings, exercise multiple spiritual gifts, and build the administrative foundation for a church to thrive four decades later!

Today we don’t only celebrate the legacy of Apostle Paintsil. We celebrate a God who can use anyone, of any gender, at any age for his own glory.