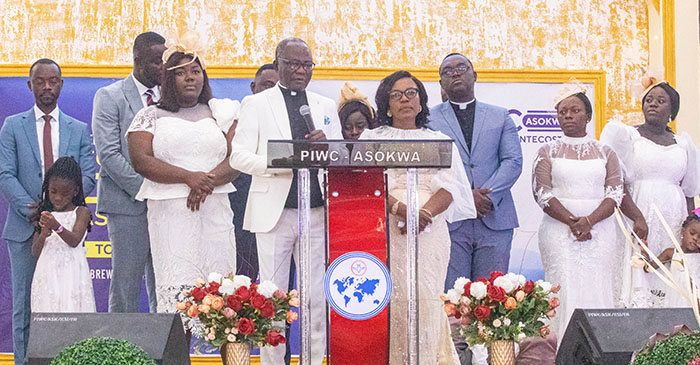 Like the prophet Samuel, who spent all his life serving in the house of God, so is Prophet James Osei Amaniampong, who, right from school, was called into the full-time ministry of The Church of Pentecost, some 41 years ago.

His glamorous retirement service took place at the Pentecost International Worship Centre (PIWC), Asokwa in the Asokwa Area, Kumasi on Sunday, August 21, 2022. It was attended by people from all walks of life, including chiefs and queens in the Ashanti Region and beyond, loved ones, ministers and members of the church from Ghana and other countries.

Others were the Minister of Education, Hon. Dr. Yaw Osei Adutwum; the Member of Parliament for Asokwa, Hon. Patricia Appiagyei, among other government functionaries.

In a short but powerful sermon, the IMD, Apostle Emmanuel Agyemang Bekoe, spoke on the topic: “The Chosen Staff,” based on Numbers 17:8.

He explained that even though the call of God is there for all persons, a few ones are chosen by God for a specific task.

He posited that since God sees and knows beyond what human beings can see and know, He selects people He has deposited some unique grace to execute His work, saying, “God does not show favouritism, yet He has a choice.”

According to him, God intentionally selected Moses and his brother Aaron from the tribe of Levi, to lead the people of Israel.

He indicated that the elders of Israel grumbled among themselves due to the selection of Moses and his brother. Knowing this, God asked the elders of the land to bring 12 staffs from each of the 12 tribes of Israel to the Tent of Testimony and after daybreak, only the staff from the tribe of Levi, belonging to Aaron sprouted — budded, blossomed, and even bore fruits.

The IMD mentioned that unless one entres the Test of Testimony and meets God they can never see God and have a living testimony.

He gave four stages of life that people who meet God go through. According to him, they sprout and that no one can suppress them. They also bud, grow big and show signs of promise; blossom and finally bear fruits even in unfriendly seasons, just like the almond tree.

James Osei Amaniampong was born on April 8, 1957, as a twin at Mampong-Ashanti, to Madam Mary Afia Amaniampong and Nana Kwaku Duah Agyemang, the Gyaasehene of Ejura (both of blessed memory). He and his twin brother are the fourth of 11 siblings.

He attended Mampong Community Nursery School at Akyeremade and moved to the Mampong Presbyterian School for his basic education. As brilliant as he was, he gained admission to one of the most enviable schools at the time called St. Monica’s Infant Junior School. He later went to stay with his father at Yeji to continue his education at the Yeji Local Authority No.1 Primary School in class six.

He proceeded to the Tamale Technical Institute after which he continued at the Kumasi Polytechnic (now Kumasi Technical University) and read General Engineering with a specialisation in Ordinary Technicians Diploma (ODT) in Plant Maintenance and Work Services, in line with his ambition to enroll in the military after school.

However, he was called into the full-time ministry of The Church of Pentecost just after he had completed the Kumasi Polytechnic in 1981.

Prophet James Osei Amaniampong has held many positions in the church, including an Executive Council Member (2011-2021), Board Chairman of Pentecost Convention Centre, Gomoa-Fetteh (2013-2022), and Greater Accra and Ashanti Regional Co-ordinating Committee Chairman, from 2015-2018 and 2018-2021, respectively. He was also the Planning Committee Chairman for the first Global Ministers and Wives’ Conference and the Ministers and Wives’ Conference from 2012 to 2019.

“Prophet Amaniampong has given a good account of himself as a committed and dedicated servant of God. In fact, we can simply describe him as a purpose-driven minister who always sought the overall growth of the Kingdom of God and The Church of Pentecost, in particular,” the General Council of the church in a testimony stated.

The Area Women’s Ministry, on their part, applauded Mrs Georgina Birago Amaniampong, for her support of her husband’s successful ministry.

In their response, Prophet Amaniampong and his wife were full of gratitude to God and The Church of Pentecost for giving them the opportunity to serve the church. He also thanked various individuals whom God brought their way to support their ministry.