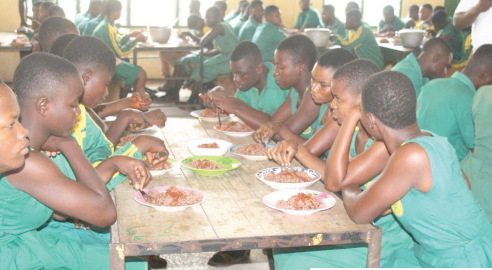 The Public Interest and Accountability Committee (PIAC) has urged the government to decentralise the procurement and management of food supplies to senior high schools (SHSs) across the country to avert the recurrent food shortages in schools.

According to the committee, the prevailing system of distributing the foodstuffs was also expensive, and so allowing schools to purchase the food items from the local market could forestall food shortages in the institutions and also help sustain the Free SHS policy. “If the government really wants the Free SHS policy to survive, it should decentralise the procurement of food supplies to SHSs and ensure timely release of funds,” the committee added.

PIAC further called on the government to ensure checks and balances in the procurement of foodstuffs to prevent possible misappropriation of funds. A member of PIAC, Erick Defor, was addressing journalists after interacting with authorities of Jema SHS at Jema in the Kintampo South District in the Bono East Region as part of the committee’s tour of the area.

The committee visited the Jema SHS dining hall during lunchtime to assess the quality and quantity of food served to students.

The committee also inspected some projects in the district that have received the annual funding budget amount (AFBA) funding, a portion of the petroleum revenue.

It includes the construction of a 1,000 metric tonne warehouse and ancillary structures being carried out by the Ministry of Food and Agriculture, the rehabilitation of a slaughter house and meat shop, and a refuse dump project under the Special Development Initiative Secretariat, all at Jema.

At the Jema SHS, the students were served “waakye”, a local dish (rice mixed with beans) without meat, fish or egg. Also, environs of the slaughter house were found to be unhygienic, while at the dump site, refuse had not been cleared for some time now.

Mr Defor also observed that the schools were not receiving their budgetary allocations on time, thus, compelling school authorities to find other ways and means to feed the students.

He said although the quantity of the food served to students at the Jema SHS was not bad, the quality was rather compromised.

Mr Defor re-emphasised that it was better for schools to be resourced to purchase food locally than relying on the National Food Buffer Stock Company Limited (NAFCO) for supplies.

He said some of the schools were located in farming communities where there was food in abundance to feed students without difficulties.

“Now consider Buffer Stock releasing food from their storage facility in Techiman to Jema, consider the distance and fuel cost. Per the report we have, sometimes they even go to the company without getting food supplies”, he added.

According to Mr Defor, PIAC was not happy about all the projects inspected in the area, saying there was no value for money in the execution of the projects.

For instance, he said work on the 1,000 metric tonne warehouse was supposed to have been completed but it was still ongoing. Mr Defor also claimed that most of the materials being used for the project were inferior and said the committee had directed the contractor and the consultants to correct all defects on the facility.

“In such situations you do not really see how the resources have been valuable to the community,” he said, adding that the inability of Zoomlion waste management company to clear refuse at the heart of the community could expose residents to communicable diseases.