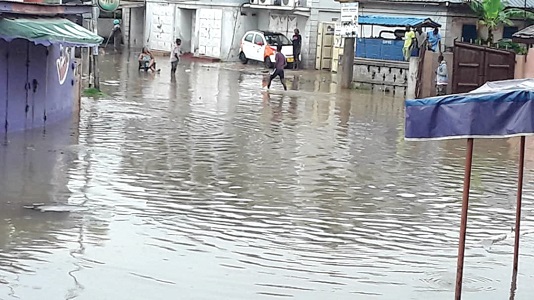 Some parts of Accra were again hit by floods after a downpour that lasted about two hours yesterday[July 5, 2022] morning.

The rains, which affected mostly the eastern and the northern parts of the capital, left many communities flooded and also caused heavy vehicular traffic on some major roads.

As usual, flood-prone areas such as Kaneshie, Odorkor and the Kwame Nkrumah Interchange were not spared by the flood waters.

Other suburbs, such as Tesano, the Dansoman Junction, the Industrial Area, the Achimota-Nsawam road and some part of the Ghana Institute of Management and Public Administration also got flooded.

Areas including Nungua, Teshie, the National Road Four (N4), which stretches from the Tetteh-Quarshie Interchange to Adenta, as well as the Kaneshie-Mallam Highway, all experienced heavy traffic hold ups due to flood waters.

The North and the South Industrial areas were once again submerged, with vehicles and bus terminals, such as the state-owned Inter-City STC Coaches Limited, being affected.

The drains in affected communities in the capital were again overwhelmed by the volumes of water which overflowed the drains and covered road surfaces, thereby obstructing vehicular movement.

The Ghana Meteorological Agency, in its latest weather update, had indicated that the rains would hit mostly the Eastern Coast and some inland parts of the country.

However, the agency was unable to tell the volume of rains and the specific areas of incidence when the Daily Graphic sought to find answers about 11:30 a.m. yesterday after the rains.

At Kaneshie, the flood waters caused a gridlock, with motorists heading to Accra through Kaneshie being forced to make a U-turn and use alternative routes.

While some drivers decided to adopt that measure to avoid the heavy vehicular traffic on the main Kaneshie road, others decided to park their vehicles and wait for the rains to subside.

Adabraka, notorious for flooding with the least rainfall, was once again flooded, especially Official Town, Odawna and surrounding areas, but the flood waters receded shortly after the downpour, an indication of either choked or inadequate space in the drains to carry the volume of water.

Some residents of Adabraka said motorists could not pass through the place due to the floods.

They said anytime it rained for even 30 minutes, the area got flooded, and that over the years the situation had remained same.

A security officer at a warehouse, Dickson Owusu, called on the city authorities to de-silt and widen drains to absorb excess water when it rained.

The Chief Executive of the Korle Klottey Municipal Assembly (KoKMA), Samuel Nii Adjei Tawiah, had earlier said the assembly was working with the Ministry of Works and Housing to construct a storm drain that would run through the Paloma Hotel and the Asylum Down area through to the Odaw River.

He said the assembly was currently awaiting final designs of the project for work to commence.

Meanwhile, he said, the assembly had undertaken some interventions, including the dredging and de-silting of drains, the construction of drains, organising clean-up exercises and sensitising people living in flood-prone areas.

“We have also carried out decongestion exercises to remove unauthorised structures from pubic walkways and pavements,” he said.

Mr Tawiah appealed to residents to avoid indiscriminate dumping of refuse into drains to allow for the free flow of water.

There has been at least four major floodings in the national capital since the rains began this season.

On April 8, parts of Accra were flooded after about an hour and a half of rainfall.

People sought shelter under buildings, at bus stops and in shops, while some were forced to vacate their workplaces.

On May 22, many residents of the Greater Accra Region and parts of the Volta Region lost personal belongings after a sustained downpour, leading to flooding in the regions.

A similar downpour and flooding occurred on June 10 and exposed the inadequate drainage system in the city, with debris of plastics and other waste materials littered on roads, posing a danger to motorists.

The inherent weaknesses in the management of Accra’s engineering architecture were also exposed after many communities got flooded and property destroyed on June 15, 2022.