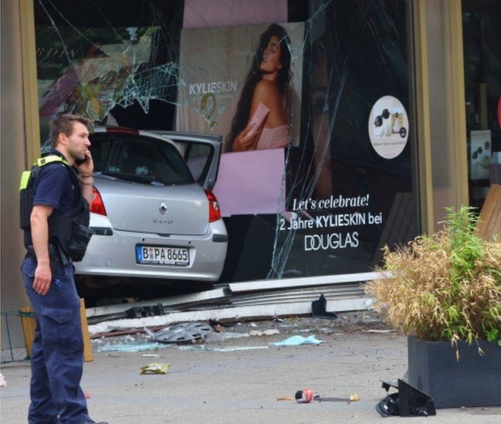 At least one person has been killed and eight others injured after a car drove into a crowd on a busy Berlin street.

Emergency officials say it is unclear whether the incident, which happened at around 10:30 local time (08:30 GMT), was intentional or an accident.

A police spokesperson told reporters that the driver has been arrested at the scene.

The incident took place on the corner of the busy Rankestrasse and Tauentzienstrasse in western Berlin.

Reports say the vehicle veered off the street and mounted the pavement before crashing into a shop front. Photos circulating on social media appeared to show a small silver Renault Clio crashed through a display window in a cosmetics shop.

Around 60 emergency workers are at the scene according to the Berlin fire service.

The actor John Barrowman tweeted that he was nearby when the incident took place and in a video posted from the scene said the car had repeatedly mounted the footpath before crashing into the storefront.

“The police presence is unbelievable. They are clearing out the area,” the actor said. “There’s helicopters coming in now to airlift people.”

The area is close to Breitscheidplatz, where 12 people were killed when a truck driver deliberately drove his truck into a crowd of people visiting a Christmas market.

IS later claimed responsibility for the attack, which was carried out by an unsuccessful asylum seeker.