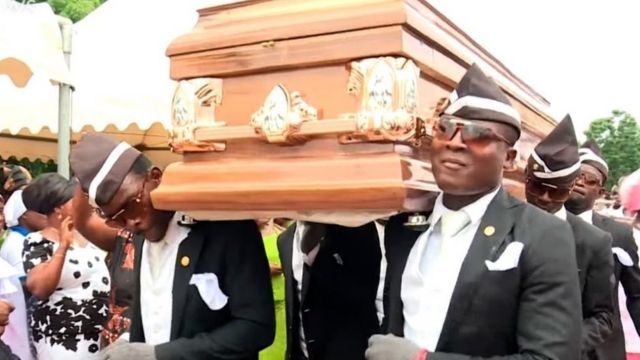 One of the most unique phenomena that marked 2020, apart from the Covid-19 pandemic, was a rather morbid trend.

Taking over social media timelines was the group of young men trying to turn funerals into rather hearty transitions.

They are pallbearers from Ghana who won the hearts of the world with their stylish movement while conveying caskets of bodies to their final destinations during final funeral rites.

Videos went viral depicting the team demonstrating their casket-carrying skills by orchestrating a choreographed routine, lifting it and lowering it, and even sitting on the floor if need be.

It developed into a meme over time where after portions of a BBC feature are added to responses to posts on social media to express impending devastation.

Though the Dancing Pallbearers gained traction for their delivery and made a decent living from the publicity that came with the newly acquired fame, no one would imagine their valuation two years down the line.

Over the past year, NFTs have grown exponentially as art and investors fall over each other to get a bite of the latest blockchain craze, with art collections worth millions being sold around the world.

On April 7, the video meme was minted by the Dancing Pallbearers team and actioned on NFT.

As of today, the group is over a million dollars richer. They have sold their 10-second meme in one of the historic Non-Fungible Token (NFT) auctions.

The amount places the meme among some of the most valuable NFTs to have crossed the million-dollar mark worldwide.

Taking to social media after the sale, the leader of the Pallbearers, Benjamin Aidoo, congratulated the Dubai-based music production company on winning the bid.

This groundbreaking procurement means the 3F Music becomes the official owners of the Coffin Dance meme.

3F Music has gained a reputation for purchasing meme-inspired NFTs. For example, according to reports, it recently acquired NFT versions of memes based on Disaster Girl, The Overly Attached Girlfriend, and the two Creepy Chans, all of which amounted to $993,000 in ETH.