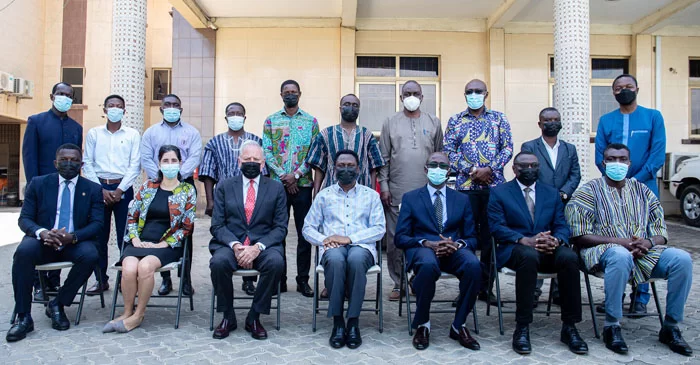 The Israeli Embassy in Ghana, in collaboration with The Church of Pentecost, is poised to change the face of irrigation farming in Ghana with the introduction of a new technology called N-Drip.

The ground-breaking gravity micro-irrigation system was developed by Professor Uri Shani, Israel’s former Water Commissioner and one of the world’s top water experts in water and irrigation.

A team of officials from the Israeli Embassy in Ghana was at the Headquarters of The Church of Pentecost on Wednesday, November 17, 2021, to interact with the Chairman of the church, Apostle Eric Nyamekye, as part of plans to introduce the technology to the church and begin a pilot project in Ghana since the church has already commenced a 10-acre solar-powered irrigation farm project at Ankpaliga, near Bawku in the Upper East Region.

Introducing the N-Drip system to the church, Jacques Blinbaum, the lead proponent of the technology, said the new technology is the most efficient alternative to flood irrigation that will vastly influence farming globally.

He indicated that N-Drip uses existing infrastructure and gravitational force for energy, making irrigation efficient at no additional cost, saying, “this technology is the breakthrough that can significantly change the global water shortage.”

According to him, the system provides an easy-to-install economic solution that uses the field’s existing infrastructure and is powered by gravity. As a result, he said, water flows efficiently using sustainable energy while lowering labour costs and money spent on fertilizers.

Expressing his delight about the visit, Apostle Eric Nyamekye thanked God for bringing the team and the technology to Ghana and Africa in general. According to him, the Church started a discussion with the former Israeli Ambassador to Ghana, H. E. Shani Cooper, to tap from the Israeli expertise in irrigation and agriculture to support the church’s irrigation projects.

“We are a church with over three million people in Ghana, majority of whom are rural dwellers, poor and farmers. We are looking at how we can improve their livelihoods so that they don’t rush to the urban centres in search of jobs which are not available,” he stated.

He continued: “As a church, we are determined to do what we can to help these people and even for the development of the whole nation. So, we have gone out of our way to building prisons for the Ghana Prisons Service to address the deplorable conditions of our prisons and provide other social interventions. Our concentration now is on agriculture,” he stated.

Apostle Nyamekye said that besides the various social interventions the church has provided, it wants to educate its members in the agriculture sector to adopt modern farming practices to increase their yields since most of them depend on rainfed agriculture.

He said that the church, through its social services wing, Pentecost Social Services (PENTSOS), is leading an irrigation project in Afram Plains and Bawku Areas, where it has acquired large tracks of land and built irrigation facilities to help members engage in all-year-round farming. He was of the view that, N-Drip will help accelerate the church’s agriculture agenda by way of enhancing the outputs of farmers.

“We want to partner with you [Israeli Embassy] to help the poor in the country. We cannot always tell the poor about heaven; we have to be concerned about their well-being as well,” he said.

The Head of Trade and Economic Mission at the Israeli Embassy, Ayelet Levin Karp, said the meeting formed part of the continuous relationship that the Embassy has established with The Church of Pentecost. She noted that the technology could be a game-changer for small-holder farmers in Ghana.

Richard Nunekpeku, a member of the team, said over the years, farmers have to invest not only in irrigation technology but also in other sources of energy to be able to power the technology to irrigate their farms.

But with N-Drip, he said, “you do not have to invest into any other energy source, adding that, “all you need to do is to ensure that water gets to your tank and flows through the tubes by gravity.”

“It saves the farmer cost of pumping water and irrigating the farm. It also ensures efficient use of water and increases the yield farmers get on their farms,” he disclosed. He added: “The beautiful thing about this technology is that it has been customized to one-acre size self-help installation. So, the ideal farmer in mind is the small-holder farmer in the village.”