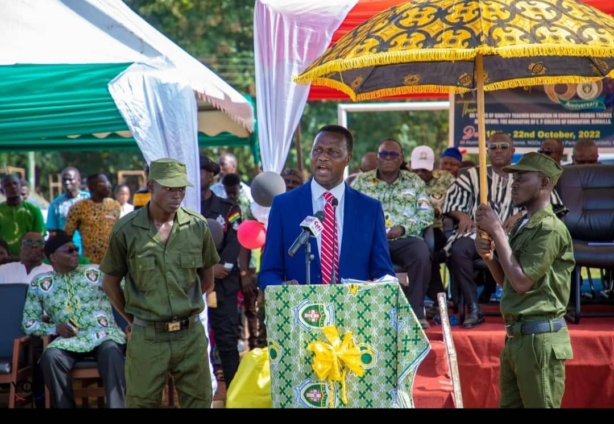 The Education Minister, Dr. Yaw Osei Adutwum, has announced that the current education transformation in the country would soon change the fortunes of the country.

He explained that reforms in the sector such as the changing from Diploma courses to Degrees by Colleges of Education, the introduction of Science, Technology, Engineering and Mathematics education and the revamping of Technical and Vocational Education and Training were among the changes in the sector.

Dr Adutwum announced this on Saturday when he accompanied the Minister for Defence and Member of Parliament for Bimbilla, Mr Dominic Nitiwul and the Reagent of Bimbilla, His Royal Highness, Nyelimboligu Naa Yakubu Andani Dasana to attend the 60th anniversary of the Evangelical Presbyterian College of Education at Bimbilla in the Northern region.

The well-attended event saw the showcasing of the rich culture of the chiefs and people of the Nanumba Traditional area and the presentation of awards to deserving students, current and former staff.

He mentioned plans by the government to ensure that all new public schools in the country are provided with sanitation facilities such as water systems and modern toilet facilities.

This, he said has been made compulsory for all new schools across all regions to avoid a situation whereby students and teachers have to struggle in the past before having access to such facilities.

Dr Adutwum stated that when done, it would help prevent the situation whereby students and teachers have to leave the classroom and walk far distances before getting access to sanitation facilities.

The Education Minister stated that efforts are underway to provide already existing schools without toilet facilities with such amenities to promote good health and sanitation conditions in all schools in the country.

He urged the leadership of the College to work very hard to ensure that their students have a unique selling point that would make them different in the way they do their work.

The Education Minister who is the Member of Parliament for Bosomtwe assured the College of the government’s preparedness to construct a multi-purpose assembly hall for the school to boost effective teaching and learning.

Mr. Dominic Nitiwul, on his part eulogized the E P Church of Ghana for establishing the school in the area which had trained several thousands of people occupying various positions across the globe.

He charged the students to make good use of the time and facilities allotted to them at school so they could benefit from the education being offered to them for their own benefit and also to support the development of the country.

The Principal of the College, Dr. Ibrahim J. G. M-Minibo, lauded the government for the various development initiatives introduced into the college and called for more of such projects to meet the increasing student population.

The E. P College of Education was established in 1962 as a 4-year Certificate ‘A’ Teacher Training College. It has since gone through various transformation systems leading to its current status. The College which started with 35 students now has 2,015 students.

12 hours ago Samuel Ansong
We use cookies on our website to give you the most relevant experience by remembering your preferences and repeat visits. By clicking “Accept”, you consent to the use of ALL the cookies.
Cookie settingsACCEPT
Manage consent