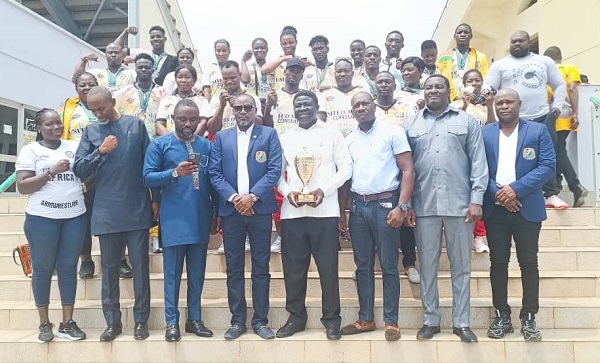 The national armwrestling team, the Golden Arms have returned to the country after winning a total of 45 medals to finish third at the 11th Africa Armwrestling Championships which ended last Friday (July 22, 2022) in Lagos.

Each of the pullers – 10 males and 11 females – won at least two medals each during the Championship.

Twelve countries participated in the competition which started on July 19, 22.

Addressing a press briefing yesterday (July 25, 2022) in Accra, the President of the Ghana Armwrestling Federation (GAF), Charles Osei Asibey said the exploits of the pullers were a testament to the strides Ghana was making in the sport.

He also noted that the latest medal haul means the country has won a total of 179 medals at four separate African Championships with 56 per cent being gold medals.

Mr Asibey who was elected the Armwrestling Federation of Africa President at an elective congress held during the Championship said his election was in recognition of the exploits Ghana was making in the sport.

Additionally, he said his manifesto which was centred on developing armwrestling, organising massive championships and a focus on athletes convinced the delegates to give him 72% of the valid votes cast.

The 12th edition of the Africa Armwrestling Championships which would be used as a qualification tournament for the 2023 All Africa Games would be held next year in Ghana.