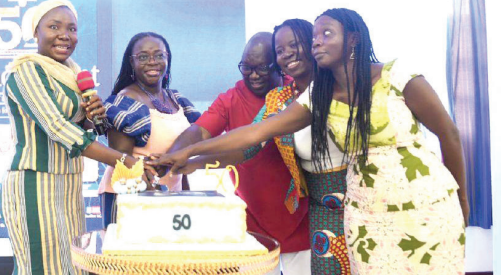 That, he said, was to facilitate teaching and learning across the various institutions. Former President Mahama made the call yesterday at the launch of the 50th anniversary of the Department of Communication Studies of the University of Ghana.

A 50th anniversary cake was cut at the event, which was on the theme: “Fifty Years of Excellence in Communication Scholarship and Training: Reimaging the Field in a Digital Era”.

Speaking via a pre-recorded video, Mr Mahama, who is currently out of the country, said from a previously analogue world, humanity had, over the last few decades, entered the digital era, one that dictated almost every aspect of life.

Mr Mahama, who was the special guest of honour, said digital communication had brought considerable convenience to consumers. Education delivery, Online learning reaches a far expansive population beyond the confines of a physical classroom,” he stated.

The regional centres, he said, were equipped with video conferencing facilities and smart lecture theatres and that project gave the University of Ghana the needed fibre optic guaranteed cloud service and the ability to deploy wifi zones over a wide spectrum.

A Deputy Minister of Information, Fatimatu Abubakar, said the contribution of the Department of Communication Studies to national development was enormous.

“When it comes to businesses and our political enterprises, the department remains the oxygen that gives life to all our institutions. It has done it, it is doing it and we look forward to another 50 years and beyond of collaboration and continued support,” she said.

In a welcome address, the Vice-Chancellor of the University of Ghana, Professor Nana Aba Appiah Amfo, said the department was celebrating its 50th anniversary at a time the country was faced with both opportunities and threats brought on by the fast evolution on the media and communications landscape.

The Head of the Department of Communication Studies, Dr Abena Animwaa Yeboah-Banin, said the department had begun efforts towards securing a larger, purpose-built office complex fitted with adequate teaching and learning facilities, including a fully functional production facility (with studio). “Our consultations indicate that if we can secure funding, the university will give us land for its construction,” she said.

According to her, the department was restructuring its offerings to ensure its continued relevance, while making them accessible to more people, and would soon launch four new programmes (two regular and two flexible) in Strategic Communications and Multimedia Journalism.

“We are also working towards introducing short courses that tackle emergent needs in industry, including, for instance, on local language broadcasting,” she said.