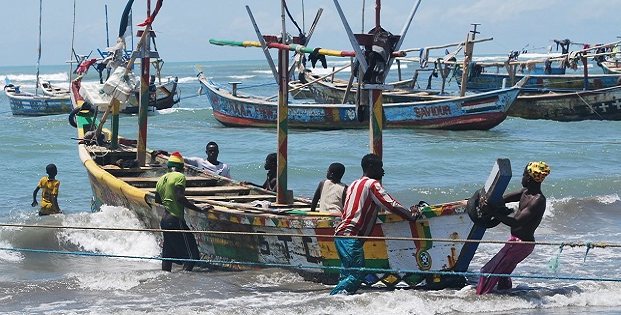 While some of them have called for the scraping of the closed season because it is unproductive, others have asked that it must be suspended as a result of the harsh economic conditions.

On the other hand, some of them have indicated that the closed season is a good intervention but it needs proper implementation.

Speaking with the Daily Graphic, the fisher folks said while they considered August the most appropriate period to close the sea, the government should also make cash payments to fishers to offset the anticipated revenue loss during the sit-home period, in the face of the current economic challenges.

From the Jamestown Landing Beach in Accra, Zadok Kwame Gyesi reports that fishers disagreed with the directive from the Ministry of Fisheries and Aquaculture Development to close the sea to artisanal fishers from July 1 to August 1, this year.

According to them, they were not consulted by any official from the fisheries regulatory bodies before the closed season was announced, even though they had pledged their readiness to comply with the directive.

A fisherman, Nii Okai, told the Daily Graphic that the closed season had no impact on fish stock, describing the exercise as a “waste of productive time”.

Even though he admitted that their catches had gone down drastically over the years, he said the closed season would in no way help increase the stock.

That was because some fishers continued to engage in illegal, unreported and unregulated fishing practices, including the use of light for fishing, he intimated.

For him, fishers had not seen any improvement in fish stocks after the closed season, hence their argument that the exercise looked good only in books but not in reality.

Another fisher, who identified himself as Markwei, was of the view that since fishers were not benefiting from the closed season, it would be better for the Fisheries Commission and the Ministry of Fisheries and Aquaculture Development to scrap it altogether.

He said fishermen had no alternative businesses and relied only on the sea to be able to maintain their homes and so closing the sea for one month without the government making any provision to address their suffering would compound their already worsened plight.

According to Markwei, none of the fisherfolk at Jamestown had benefitted from any government support or assistance during previous closed seasons.

Yaw Mensah, who also undertakes his fishing activities at Jamestown, said he had to spend all his savings during the closed season, since he had no alternative means of livelihood.

He said whether fish stock increased or not after the closed season, it was the fishers who engaged in illegal, unreported and unregulated fishing who always smiled, with those using approved methods always getting nothing from their expeditions.
Sharing his concerns, Nii Ashitey, a

fisher, said for a very long time the fishing communities had been neglected in all decisions that affected their lives, noting that it was sad that fishermen at Jamestown were not engaged on the closed season.

From Cape Coast, Shirley Asiedu-Addo writes that a section of the fishing community indicated that scientific data pointed to August as the most appropriate month for the closed season

The President of the Canoe and Fishing Gear Owners Association of Ghana (CaFGOAG), Nana Kweigya, who was among those who suggested August as the appropriate period, indicated that the DGN net (ahyekon) fishers went for fishing in July and the continuous closure of the sea in July meant the collapse of that form of fishing.

According to Nana Kweigya, inadequate supply of premix fuel had prevented many of them from going to sea for the past four months, which had worsened the plight of fishers along the coast.

A canoe owner in Cape Coast, Kweku Appiah, said the hardships along the coast would be worsened by the closed season.

He said it was appropriate for the government to work to engage fishers further, saying it would be proper not to have the season closed this year.

He added that it was important to examine the times and make decisions that would reduce the hardships of fishermen, and that closing the season would not be in their interest.

From Anloga, Alberto Mario Noretti reports that a local fisherman, Sassi Kudoto, 57, called on the government to provide fishers with some money to live on during the closed season.

He said fishing was his only livelihood and so the closed season would unleash hardship on him and his family.

Kudoto, who has two wives and 11 children, said he and other fisherfolks appreciated the need for fish to have time to reproduce without any interruption, for which reason they did not go fishing at night.

“We do not need to close the fishing season for any reason,” he insisted.

He said it would be proper for the government to consider distributing funds to fishermen who would be out of work during the closed season, based on the sizes of their families.

On the contrary, a fisher at Woe, Nelson Deynoo, 66, said enough education had preceded the closed season slated to start on July 1.

“With so much education, we understand the need to close the sea for a short while and we are prepared for it,” he emphasised.

Benjamim Xorman Glover reports that some fishers who spoke with the Daily Graphic at the Tema Canoe Basin said they were opposed to the implementation of the closed season this year because of the harsh economic conditions.

One of them, Nii Adjetey, said fisherfolk, like many other Ghanaians, were already suffering due to the general economic situation.

He appealed to the Minister of Fisheries and Aquaculture Development to come up with alternative income sources that would support members of the fishing communities economically during the closed season, else asking them to stay at home for a month would impact negatively on their livelihoods.

In Ada, members of the Zone Four Fishermen Association also opposed the implementation of this year’s closed season.

The Secretary of the association, Joseph A. Alimo, said over the last three months, fishermen had not been able to go fishing due to tidal waves which, in some cases, destroyed their fishing gear, putting them out of business temporarily.

He further indicated that premix supply for the last four months had not been stable, which had also impacted negatively on their businesses.

Some fish processors and fish mongers told the Daily Graphic that their livelihoods would be threatened, while their families would be seriously affected, by the implementation of the closed season this year.